Everyone knows that there is a disconnect between the positioning of the major U.S. stock indexes and the performance of the economy. The question is whether that gap is going to be corrected by an economic rebound or by the stock market selling off. As far as market expectations of earnings reports for the second quarter, the bar is certainly low. In aggregate, S&P 500 companies are projected to report a 43 per cent plunge in profits for the second quarter and a 10 per cent drop in revenues, according to FactSet. The net profit margin for companies on the blue-chip index is slated to come in at 7.3 per cent — the lowest since the final three months of 2009. However, with the bulk of companies that have reported earnings so far, numbers have generally come in brighter than “expected.” We mentioned in earlier posts, that Wall Street tends to play a game of setting expectations lower than reasonable so that when the bad numbers come, they can be a pleasant surprise. Perhaps reflecting the effects of unprecedented stimulus from Congress and the U.S. Federal Reserve. As of Thursday evening, almost four-fifths of the S&P 500 companies that had provided quarterly updates had posted earnings per share that were above analysts’ expectations and, in aggregate, were reporting earnings 13 per cent above estimates, according to FactSet. Both those numbers are better than the five-year averages. Some of the earnings forecasts for yet to report companies have pushed higher – so the remainder of earnings season will probably be better than the terrible situation many were braced for. Of course, all these better performances could be reflecting the effects of unprecedented stimulus from Congress and the U.S. Federal Reserve. The Fed has bought up assets (bonds and bond mutual funds) in the open market thereby more than doubling the size of its balance sheet to more than $7.5 trillion. Congress has thrown in some humungous “stimulus” packages spending some $3+ trillion – and that will likely go higher! So, it remains to be seen how well the market would stand on its own feet if/when the artificial support is removed.

One thing to keep an eye on is dividend payments which were down a net $42.5bn in the second quarter (among S&P 500 companies) from the same period a year ago, the biggest such decline since the financial crisis, according to Howard Silverblatt, senior index analyst at S&P Dow Jones Indices.

Going forward many companies may still decline to provide guidance as there is so much turmoil muddying the waters. Everything from the Covid-19 virus to riots and protests to an escalation of political conflict with China and the pending election are adding huge unknowns to decision making and therefore forecasts of our economic future.

With that in mind, we look back at the indicators that we have repeatedly reference in this post. The selloffs in crude oil prices and junk bonds have both had a band-aid thrown on them by the FED and to this point have not dominoed into other problems.

The present selloff in the value of the U.S. dollar versus other currencies: 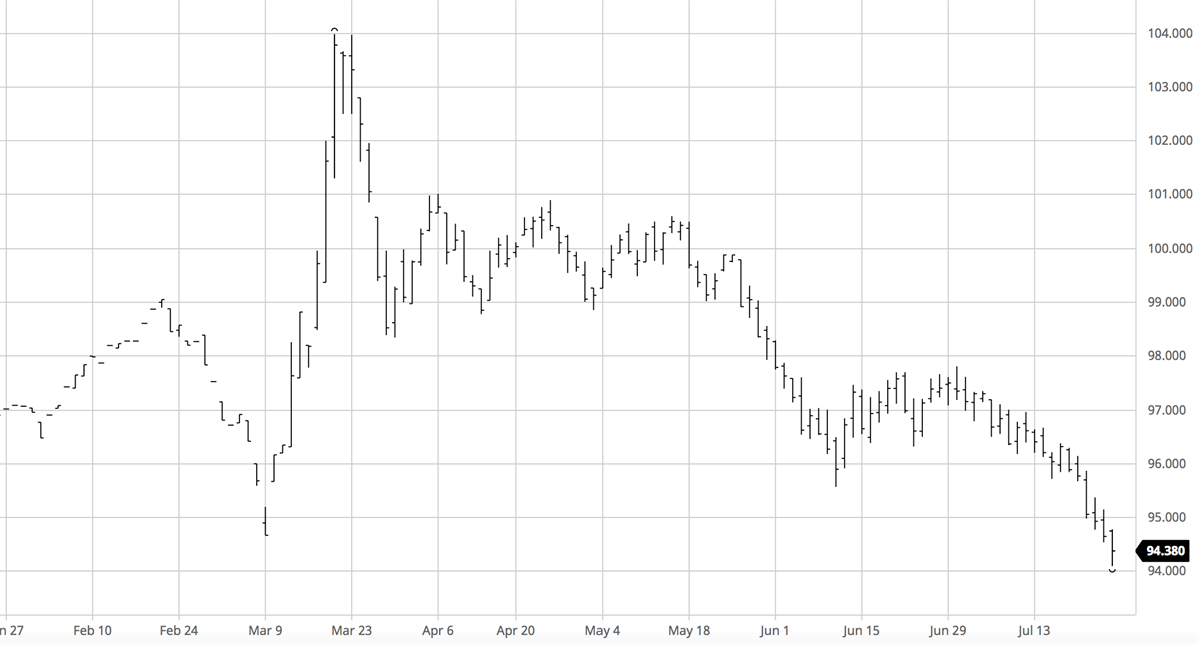 This is not yet a five-alarm fire by any stretch – but we need to watch it (and don’t sell your gold.)  Keep in mind this index is heavily weighted toward the Euro – so it is not indicative of the value of the dollar universally. This appears to be a relaxing of some of the panic the pandemic brought us - which is good news… but if the selloff continues it will become a concern. The world economy from some perspective will be better with a weaker dollar – there is a ton of debt owed in dollars.  The issue would be if the selloff accelerates and dominoes into panic.

Right now, there is no panic in the stock markets and, although they could certainly selloff a bit and consolidate in the short term, we don’t see huge medium-term danger. The Fed and Congress will certainly keep throwing support at asset markets – time will tell if it will be sufficient.