Canary in the Coal Mine

Predictions of monetary/economic doom are prevalent in the financial news media right now and as much as we complain about the actions of central bankers worldwide, it would be hypocritical of us to poo-poo those fears. The Federal Reserve alone poured trillions of $ of “liquidity” onto markets over decades but quite acutely since the advent of the Covid-19 “pandemic.” Asset markets have responded with a boom in prices. From real estate to stocks, bonds and commodities there have been sharp appreciations with some calling our present situation the “everything bubble.” Inflation fears and numbers in some respects have rocketed higher leaving many wondering why the FED had kept “emergency policies” in place so long including zero short term interest rates and asset purchases on the open market of $120 billion per month. Now the FED is going “hawkish” meaning they will tighten monetary policy and mop up some of this liquidity and it has engendered fears of bubbles popping and economic doom. We have said for years that of the world’s developed market central bankers, the Japanese were the worst offenders, and they should be watched as a canary in the coalmine so-to-speak. In other words, the game of adding and subtracting “liquidity” in the world’s monetary system as the central bankers see fit has never appeared to be good long term strategy to us. Japan might be a good indicator when that game may start to unravel.

The situation in Japan is one of a mountain of debt at ridiculously low interest rates. Total government debt is pushing 300% of GDP (remember, Japan is the third largest economy in the world,) but the central bank owns about half of it and some of it is still at a NEGATIVE interest rate. The interest paid by the Japanese government pencils out to be only about 1% of GDP. It’s an amazing trick if it stays intact. In the last couple weeks, however storm clouds are forming on the horizon. With interest rates rising worldwide, imagine being a Japanese bond investor. Inflation and bond yields are going up everywhere and you are holding Japanese Government Bonds that are yielding somewhere between almost nothing and less than nothing. Historically this actually made some sense because of the consistent deflation in Japan – but that is obviously not the case now. So, bond investors are nervous, and the Bank of Japan has had to publicize that it will backstop the 10-year JGBs at .25%. This means that they won’t let the price of the bonds go below what would represent a .25% yield. Of course, they must print more Yen to buy those bonds and backstop that price and here is where the dilemma presents itself. The value of the Yen is crumbling (20-year lows vs. the dollar) and the BOJ is realizing that it can’t do both; limit the interest rate rise on the 10 JGB and protect the value of the Yen. 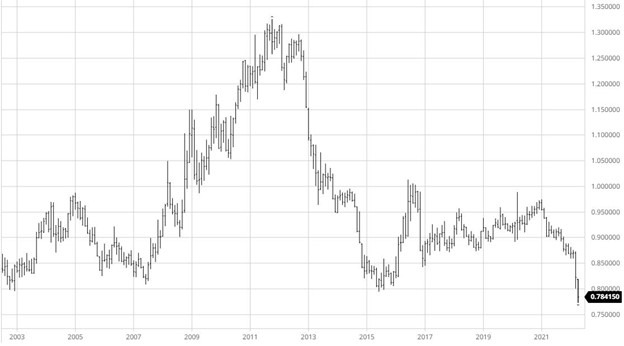 Some Japanese investors are selling their bonds to the BOJ and buying U.S. treasuries (where the ten-year yield is more like 2.75%) in order to protect their purchasing power. If the U.S. Federal Reserve continues on its “hawkishness” and interest rates continue higher in the U.S., this could certainly be a catalyst to something breaking in Japan as more bond selling occurs and possibly domino into other parts of Asia. Remember, the futures markets are pricing in more than a 2% rise in short term interest rates in the U.S. – so something has to give. Will the Fed stick to its guns and keep raising rates to fight inflation and cool off the economy? It sure looks to us that the inflation fears are overdone and estimates of how many times the Fed will raise rates is DRASTICALLY overestimated. As of the writing of this post, the commodity board is blood red. Crude oil is getting smashed well back below $100 per barrel and gold and silver are trading below where they were when Russia invaded Ukraine. The stock market has sold off and BONDS have stabilized – even rallying back a bit. The U.S. dollar is MUCH firmer against a basket of foreign currencies over the last few weeks as well. Of course, we are referencing a very small window of time and a snapshot observation, but the markets really do not look like we have runaway inflation that the Fed is going to have to accelerate interest rate raises into. If the Fed does start accelerating short term interest rates higher, we will be even more worried about our little canary in the Japanese coal mine.

We have many earnings reports and economic data that will be coming out this week which could certainly move the markets. However, much of it will be backward looking rather than forward. Some of the more forward-looking indicators are not showing a robust economy. B of A’s weekly shipper survey “at near freight recession level” is one example and a big decline in existing home sales in the U.S. is another. This doesn’t indicate a big need for higher interest rates. Also – some of the causes of price spikes are clearly not a monetary phenomenon. Supply chain disruptions have been bad – and now in some cases may get worse with some of the lockdowns in China. A satellite image of the shipping vessels waiting to get into the port of Shanghai makes our recent Longbeach logjam look like a child’s play. This has caused shipping of some items to STOP and consequently, price rises will be inevitable. Raising interest rates will not solve this problem and will possibly create new problems to add to our stack. Don’t forget the Russians are still in Ukraine and there is new talk of sanctioning China. There may be other issues for the world economy that haven’t really manifested yet.  Raise cash if you need to but hopefully your portfolio is balanced enough to endure some volatility – just remember we may have a lot more. We have many problems with the Federal Reserve and the monetary structure they are managing in general – but we are not in the camp that the Fed won’t pause if asset markets really start taking on water.  We are buying the dip in the price of birdseed…