After a summer hiatus and without posting our weekly writeup, we are back after it and preparing for the fall. Hopefully all readers are healthy and happy and ready for the holiday season – of course Covid-free as the weather cools off!

Looking at the financial markets as we head into the historically dangerous part of the year, the same situation is playing out that we have been describing for quite some time now.  The Central Banks of the world are drowning financial markets in “liquidity” – meaning basically they are printing a ton of cash! Historically when so many currency units were conjured up the price of day to day living rocketed higher. Of course, there are many stories of people in the Weimar Republic in Germany taking long lunch breaks during workdays to go spend money in stores before the afternoon came and prices were higher. Domestically some of us have the memories of the 1970s where the Nixon Administration implemented price and wage controls on the American economy to stifle inflation in many industries. (Donald Rumsfeld was in one of the positions of control as the director of the “Cost of Living Council” – not a joke, look it up!) Of course, there were many unintended consequences of attempted centralized control, but that discussion is for a different post…

Mark Twain said it best – history doesn’t repeat, it rhymes. In this episode of currency unit creation by the Central Banks the inflation has taken a different shape. That of asset price inflation…

Technological innovation has brought about amazing efficiencies - in food production as an example -over the last few decades. Many of the day-to-day consumption expenses such as food and energy just haven’t rocketed higher to the degree even that we saw in the 2011 commodity launch. On top of that, America is aging and bulging at the waist, so freshly printed money doesn’t really flow into consumption type goods the way it comparatively did in the past. This time around excess “liquidity” is getting piled into financial and real estate markets. Bonds in particular are of completely manipulated prices as interest rates are artificially suppressed by the FED. The bond market as a whole has historically feared inflation. Now bond investors assume that the FED will keep prices elevated and they continue to buy. Look at the percentage of JUNK bonds in the U.S. market that yields less than THE GOVERNMENT’S OWN CALCULATION OF INFLATION. 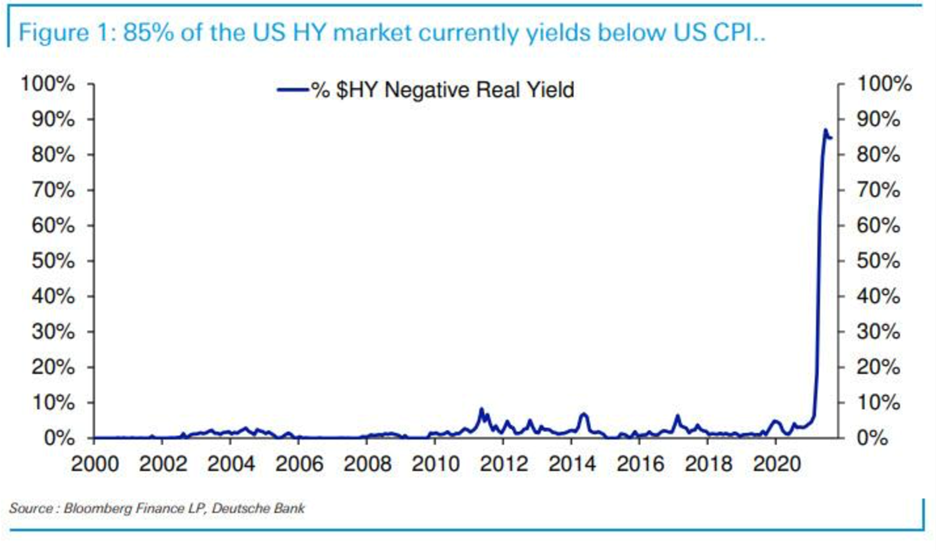 That’s right, in real terms you are not even making money on 90% of JUNK bonds and you are taking a lot of risk (if you are not taking the risk and own treasuries you are losing a lot of money in real terms because the yield is so low.) When you look at the chart historically, you can see that this is quite the anomaly. The percentage of JUNK bonds losing money after calculating in the inflation numbers has never even been 10% before now! The Federal Reserve says that the high inflation numbers that are making these JUNK bonds yield negative in real terms is transitory. The FED is saying that inflation will subside in coming months as supply chains are bandaged back together following this Covid destruction. Well, they better be right because this is an unsustainable situation as the FED is purchasing $120 Billion per month of assets on the open market and fueling this inflation AND the financial markets.

But the trillion dollar question is when will the FED take their foot of the gas and stop pouring $120 Billion per month into financial markets? Justification for all of these asset purchases, interest rates artificially low and basic currency creation by the world’s central banks of course has been the Covid situation over the last 18 months or so. Now financial markets are running into a snag with the Chinese real estate situation and the Evergrande bond default. Many are drawing parallels between this and the Lehman Brothers situation in the U.S. in 2007. Will the Evergrande situation spiral downwards into a contagion like the “Schemin” Brothers situation? Will the FED stop supporting markets with the possibility of that on the horizon? We find it difficult to believe that they will get religion now and try to let the financial markets stand on their own feet. We guess that one of the FED governors this week will make a statement that the tapering of FED support will get put on hold until the Chinese situation is resolved. We also guess that the Bank of China will calm markets down with additional “stimulus” in the near term as well.

Of course, with all of the tens of trillions of dollars of leverage in the world’s financial markets, eventually the Central Banks won’t be able to save the day.  We are not speculating when that will be. In the meantime, don’t sell your gold.