The numbers of infected cases across the globe is coming back in another wave as the Northern Hemisphere starts to turn cold. This isn’t a surprise, of course. When looking at historical pandemics often subsequent waves turned out worse than the first. There are some legitimate questions about how the numbers of Covid cases were being tabulated especially considering drastic differences between states depending on the political party of their governors (see previous post at https://andorracapital.com/progress-of-economic-reopening/). However, everyone agrees that overly filled hospitals are a problem – and that may be where we are going. Currently, there are more than 41,000 COVID patients hospitalized in the United States, a 40% rise in the past month and this second wave is spreading out to more smaller towns with fewer resources, which can translate to less effective care. In Kansas City earlier this month, ambulances were reportedly turned away from hospitals that ran out of room. Field hospitals are currently opening in Salt Lake City and Milwaukee. That is obviously a concern that financial markets appear to be responding negatively to.

More volatility is getting dialed in to financial markets as the idea of a stimulus agreement between Pelosi/Schumer and McConnell. It appears that there is little to no possibility that an agreement will be reached before the election. Although most market observers assume that there will be a stimulus agreement after the election, of course no one knows exactly how that will look.  Checking back to 2016 there was much more consensus among market pundits about the effective results of the election. EVERYONE was predicting that Hillary would be good for the stock market and The Donald would be bad. This time around we are all over the board. Many see a Biden victory as a positive for the market, but then just recently JPMorgan head of global equity strategy, Dubravko Lakos-Bujas says "an orderly Trump victory as the most favorable outcome for equities (upside to ~3,900.)"  This contradicts a Bank of America analysis that a Democratic sweep of Congress/Senate and the White House would be the most positive for the stock market. The point is not to identify who is right or wrong – the point is that there is not a consensus between analysts. That reality lends for more volatility in front of the election, and the market has been ping ponging up and down on many issues including earnings reports that are very inconsistent. Other market movers are news of the polls, vaccinations, European states contemplating a return to lockdown, stimulus agreements, military conflicts overseas, etc..

We are looking at some of the hard data and the recovery is at least pausing. Economic data from across Europe is softening. Even the white-hot U.S. real estate market appears to be cooling off. New home sales were expected to rise only a modest 1.4% MoM in September (vs +4.8% MoM in August) but things were notably worse with new home sales tumbling 3.5% in September (and August's bounce revised down to +3.0%.) So, we will see how the recovery continues – and when we get stimulus. Sadly, it is difficult to have a whole lot of confidence in the economic recovery without more government stimulus.

One thing to keep an eye on in the meantime is what is happening in the corporate bond world. Bankruptcies are rising and representing almost total losses to some bondholders. As ZEROHEDGE has warned us in the past:

Instead of recouping, say, 40 cents for every dollar owed, as has been the norm for years, unsecured creditors now face the unenviable prospect of walking away with just pennies -- if that. 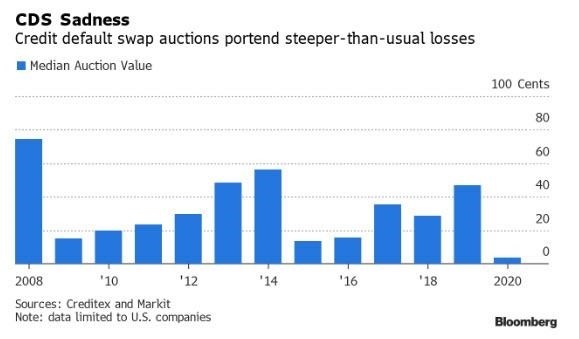 Right now, according to Barclays, the median value for companies’ cheapest debt in credit derivatives auctions this year is just 3.5 cents on the dollar, a record low and far below the 23.4 cent median for 2005 through 2019.  Of course, much of this is thanks to the Federal Reserve and artificially low interest rates allowing companies to issue oceans of mispriced bonds for decades now. But it is also partially due to creditors not taking the risk seriously enough amid a frantic search for some sort of interest yield. As we have consistently discussed in this post, the debt load that America – and really the whole world for that matter – is not sustainable long term and watching the bankruptcies coming up will be an important indicator of whether or not the markets can adjust and start pricing this debt more appropriately.