The launch of cryptocurrencies began with Bitcoin in 2008 and at that point it had very little fanfare. The cost per Bitcoin was just over $.01. The origins of Bitcoin are still very mysterious even to this day. The “founder,” Satoshi Nakamoto – and no one knows if this is even an actual person – originated the decentralized currency and its price quickly started higher.

Quickly the value of Bitcoin began its assent and by the end of 2017 had traded at nearly $20,000. It sold off from there but in spring of this year traded $64,000 and now may be heading back towards the high. Thousands of other cryptos have been created in the meantime attempting to cash in on the same frenzy and it is still a very hot topic.

We frequently get questions from investors about crypto-currencies and whether we believe they will replace the banking system, whether they are a complete Ponzi-scheme and will soon crater to zero, or something in between. Our response is that we see crypto as innovative technology, but speculative financially. There is nothing wrong with having a “toe in the water” as we suggested nearly a year ago https://andorracapital.com/u-s-dollar-weakness/ - but we certainly don’t agree with going “all-in” as some aggressive bloggers do.

One of the big reasons we view Bitcoin and other cryptos as speculative is because their core functionality – and that is a decentralization that can’t be taken control of by a government or a central bank. As we have repeatedly discussed in this post, the central banks of the world have far more power than ever and it continues to grow. That power will not be relinquished easily. We don’t have any insider information on that, we are just referencing one of the core axioms of human nature. We also don’t see these cryptos replacing the functions of our banking/monetary system. Without going of too far on a tangent - a quick illustration of this – Imagine in summer of 2019 you borrowed $300,000 in Bitcoin to buy a new house. Your monthly payments – from about $1300 in 2019 are now NEARLY $17,000 PER MONTH (corresponding value of Bitcoin.) But it gets worse - now instead of owing about $285,000 – you owe Bitcoin that are worth about $3.98 million. Cryptos as they exist are NOT going to replace our banking system – but the market capitalization (total value) of these currencies has gotten quite impressive (courtesy of coinmarketcap.com) totaling nearly $2 trillion… 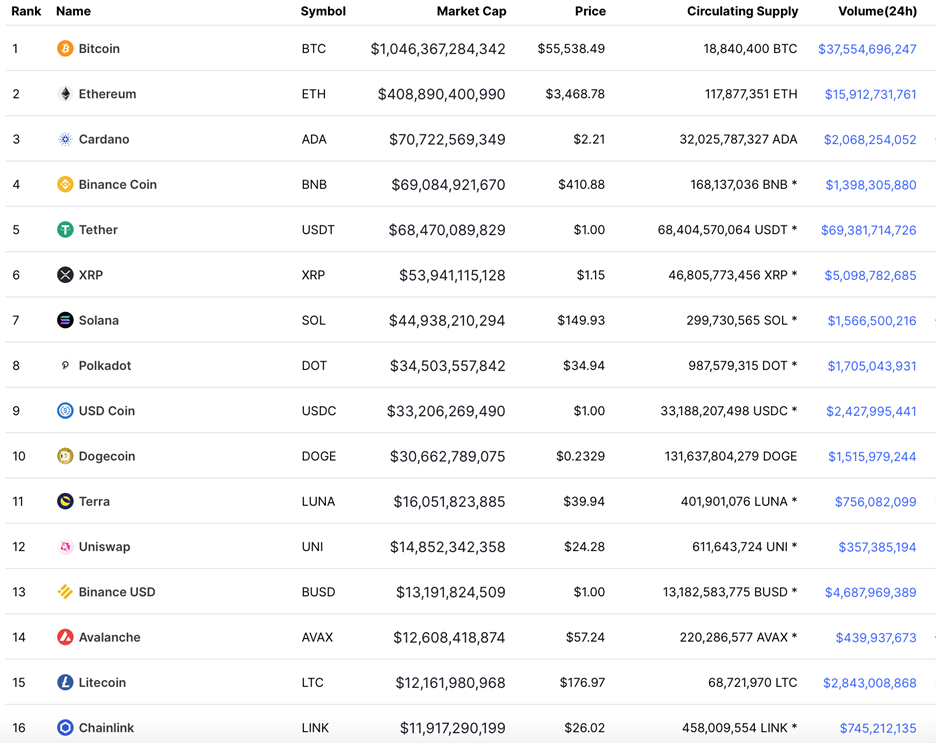 But now the story gets more complicated. Central banks are figuring out some of the power that the cryptocurrencies have – and they are developing versions of their own. The big difference in the government/central bank issued currencies is they will be centralized rather than decentralized. The issuing bank will have total control over the currency units. They will know who holds them, how they are spent, when they are spent – they will even have an off switch if they want to shut a new crypto - currency holder down. The Chinese are expecting to roll their new crypto yuan in time for the 2022 Olympics – and have already divulged that it will have a timing mechanism programable into it. Meaning, if the “People’s” Bank of China chooses to, they could put an expiration date on specific units of the new currency. That’s right, if you are contemplating storing these crypto yuan for future use (or for capital gains like Bitcoin) you may want to rethink your strategy.

And don’t think for a second that a timing mechanism is the only thing that can and will be programmed into these “cryptos” launched by central banks. They will have the power to dictate precisely how these currencies will spent, and quite obviously, if these currencies ever hit the market, they will use that power. Many communist countries historically have figured out in isolated situations how to pay workers tokens rather than currency that could be used internationally or even nationally. Chinese steel workers were a perfect example. They got paid in tokens that were only redeemable at the company store on campus (prices probably weren’t very competitive.) Central bank issued cryptos would be the same animal with different stripes. The bank could create currency that couldn’t buy books written by people spreading “misinformation” as an example. Digital cash could be programmed to ensure it is only spent on essentials, or goods which an employer or government deems to be sensible. This isn’t conspiracy theory paranoia. A quote from Agustin Carstens, head of the Bank for International Settlement (kind of the central bank for central banks in Switzerland) sounds like this:

[The key difference [with a Central Bank Digital Currency] is that the central bank would have absolute control on the rules and regulations that will determine the use of that expression of central bank liability, and they have the technology to enforce that]

First of all, how do you like the fact that a central banker for central banker refers to your money as “central bank liability” – and second to consider that, therefore it is only their right to control it? This is ominous for the long term…

…or how about a quote from one of our favorite directors at the Bank of England, Tom Mutton…

“You could introduce programmability […] There could be some socially beneficial outcomes from that, preventing activity which is seen to be socially harmful in some way”

This is obviously an arbitrary all-encompassing power over society that would make George Orwell’s skeleton blush. But before we go off the deep end and run for the hills with our freeze-dried food and shotguns, let’s consider some of the good news when looking at this situation from 20,000 ft...

The U.S. dollar is the world’s reserve currency – that is still paying us dividends on the whole as a society. No matter how often we disagree with Chairman of the FED Powell, it is quite apparent that he is aware of our position and isn’t going to attempt to launch a crypto in the near term. Although it will happen eventually – quote from Powell ensures that: "It's more important to do this right than to do it fast," we have time to watch how this rolls out around the world and prepare accordingly if necessary.

As we sit now, our financial “leaders” have a lot of work to do just in weaning us lowly Americans off cash (and they are attempting to do just that.) Right now, in our society, nearly half of all daily transactions less than $50 are done in cash. THAT IS GREAT NEWS!! Our officials can’t spend their political capital squashing that – it is largely in the parts of society that are “marginalized” according to the identity politics that are prevalent today that this cash is utilized. Any large changes to our financial system will be staged in – and right now it still looks like officials are “testing the water.”

In the meantime, don’t sell your gold and consider using cash on a more regular basis. A movement is starting for Americans to only use cash on Fridays rather than debit/credit cards. We are fans of this idea – cash is the ultimate economic freedom, and we don’t want to lose that!