For years we have been writing about the expansion of debt that has been taken on world-wide by countries, companies, and individuals. That trend of debt accumulation has exploded higher in the last few months in response to the economic shutdowns around the globe.  The Treasury Department said weeks ago it will borrow $3 trillion this quarter alone. That is nearly six times the previous record, which was set in 2008. The Congressional Budget Office expects the federal budget deficit will hit $3.7 trillion this year, up from $1 trillion in 2019 WHEN THE ECONOMY WAS DOING WELL!  So now our national debt has rocketed through $26 trillion with no end in sight. The rest of the developed world is performing similarly with debt accumulation – examples include Italy with debt totaling 160% of its GDP and Japan at a completely absurd 280%. Fed Chair Jay Powell says that now is not the time to worry about debt, so U.S. corporations have responded by loading up $1 trillion more in debt in the first five months of the year. That is the fastest pace on record. An obvious question is who is buying all this debt that is being issued? The answer of course, is the Federal Reserve and other central banks around the globe. 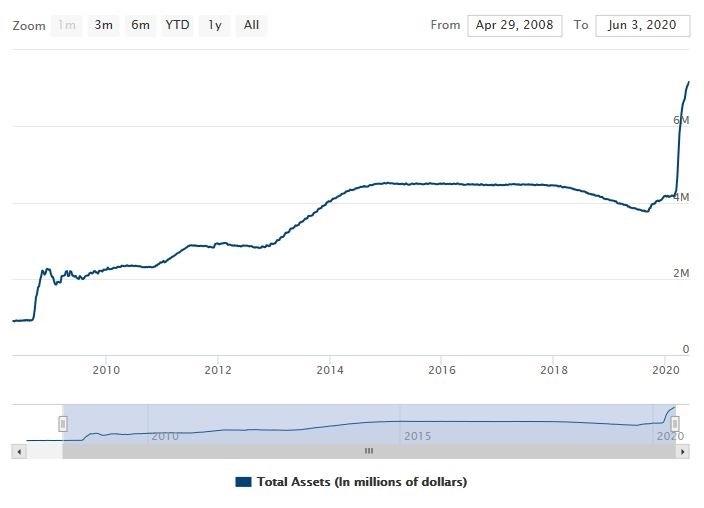 The Fed’s balance sheet has rocketed to $7.165 trillion at a completely surreal pace. Now the Fed has expanded its functionality to not just lender of last resort, but also buyer of last resort.

In the near term all the “stimulus” that is being provided has launched the stock market higher. There is a huge disconnect right now between the prices of asset markets and the economic reality underneath. While we are certain that the economy will rebound smartly from the recent shutdown, a return to the pace the economy set at the beginning of the year will simply not happen in the next couple quarters.

Economists have long understood that excessive debt numbers start to weigh down on business activity as time goes on. When will all this debt start to matter to our economy? It appears that the fallout is beginning in bankruptcy court…

In May 2009, 29 major companies filed for bankruptcy, according to data compiled by Bloomberg. And year-to-date, there have been 98 bankruptcies filed by companies with at least $50 million in liabilities - also the highest since 2009, when 142 companies filed in the first four months. 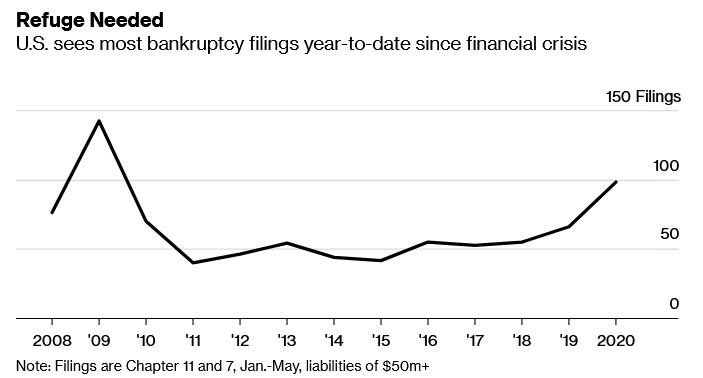 …and it’s not just bankruptcy.  Investment grade corporate debt being downgraded to junk has already surpassed $150 billion which is a new all-time record and it is only June. Comparing to previous recessions, the total may approach the $450 billion range by the end of the year. The Fed has expanded its range of assets that it intends to buy to include some of this junk debt – but probably only in the $30-40 Billion range - so there will surely be some serious fallout.  Remember a lot of the owners of this debt have to sell what is downgraded to junk and numbers this large could overwhelm potential buyers. Certainly, there will also be fallout in the government pension world where, even before the crisis some estimates guessed pensions are $4 trillion underfunded. State and local government revenues have collapsed in recent months and this is not a problem that will just go away.

The monetary and fiscal stimulus that our fearless leaders and money printers have provided starts to run out in June and July. There will likely be more measures enacted, however the timing is still up in the air.  Right now, the stock and bond markets don’t appear to be worried and prices will likely continue higher in the short term.