If you are looking at a chart of the U.S. stock market indexes, you may think that the Corona Virus challenges are behind us and we are back to a full-steam-ahead sort of economy. The fundamentals of the economy, however, show a completely different story. The Atlanta Fed’s GDP Now is estimating a -34.9 percent Q2 GDP print, which is 3.5x the largest quarterly decline in the post-WWII economy. When you add in the unemployment numbers it looks surreal. Friday’s April U.S. payrolls report showed 20.5 million jobs lost when in an ordinary downturn 200,000 might be considered bad; the drop in March alone was larger than that seen during the worst of the global financial crisis. We face a global future of mass unemployment (now 14.7% in the US and 13% in Canada) and this is being stacked on top of a mountain of debt – government, business and personal. The Labor Department stated the unemployment rate would have been about 20 percent if workers who said they were absent from work for “other reasons” had been classified as unemployed or furloughed. The official 14.7% figure also does not count millions of workers who left the labor force entirely and the 5 million who were forced to scale back to part time. 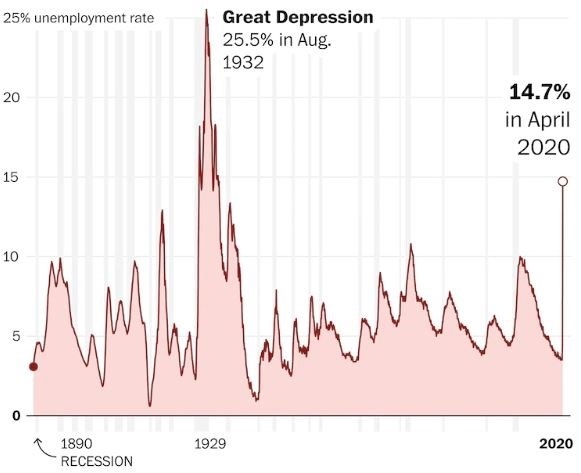 The Treasury recently sold a supersized Three - Year auction coming at a record high amount of $42Bn vs $40Bn last month. The yield was also record low at .23%. The “bid to cover” ratio was very high as well – meaning many more attempts to buy these notes than there were notes available to buy. Why all this demand for these very low-yielding notes? Because all the buyers know that they can turn around and sell these purchases to the Federal Reserve for an arbitrage profit as the Fed monetizes our debt.

The U.S. Treasury will have to issue on the order of another $3 Trillion this year and that is from programs/legislation/handouts that we can see right now. These numbers are likely to go much higher, and the investing world cannot absorb all this debt. The Fed will have to continue stepping in with “QE” and continue purchasing Treasury debt. This is dangerous in that it props up the prices of these treasuries to a staggering level with ENORMOUS new volume. Without the Fed buying there would be a meltdown in the price of the government bonds which would likely spill over into every investment class imaginable. As Scott Minerd at Guggenheim Investments put it:

Every time we get ourselves into a recession, the total debt of the U.S. economy rises relative to gross domestic product (GDP) to new and higher levels. This is not sustainable in the long run, even if we are able to push interest rates into significantly negative positions on a sustained basis.

We are all government-sponsored enterprises now… 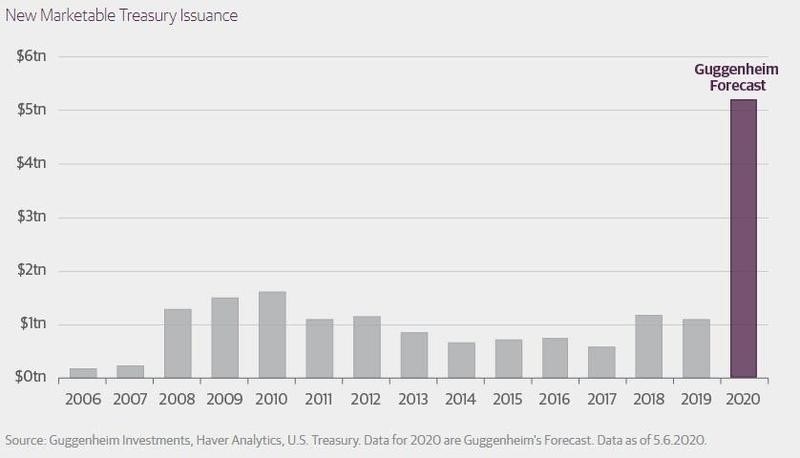 The economic numbers will of course begin firming up in the next few months as people start to get back to work. However, if history is any guide, the unemployment numbers are likely to be in the 10% area well into 2021. Other challenges are popping up as the whole world is struggling with the recent shutdown. Our government is issuing new threats to the Chinese and that is being reciprocated – so the situation appears to be deteriorating. Saudi Arabia is in a world of economic trouble with the crazy-low price of oil, and the sustainability of them continuing to price oil in U.S. monetary terms may be in question. Of course, the election looming in November could throw a huge wrench into the works of an economic rebound no matter how you look at it.

The government debt numbers are off the charts, but in the meantime, the stock market is doing well, and the economy is starting to reopen. There is an ocean of investment account cash waiting for a retest of the lows of March to buy in – so that retest probably will not happen. However, we do suggest keeping some investable cash available as there WILL be opportunities going forward without chasing the market higher – and of course, don’t sell your gold.