Earnings season begins this week, and the world markets are trying to balance the enthusiasm of a post-covid recovery and the reported data of lingering “pandemic.” In the week ending last Friday April 9, the numbers recorded by John Hopkins University showed a 4.45 million increase in cases globally, which compares with increases of 4.11m, 3.78m and 3.29m in the three weeks before that.  This increase is noteworthy, yet shy of the December and January increases. Some countries have been hit particularly badly by the latest wave, with India seeing another record 152,879 cases on Saturday. Japan has also seen some sharp rises lately, Tokyo has raised the alert level and is implementing restrictive measures to limit the spread of the virus in front of the Summer Olympics.

Europe is reporting a welcome decline in virus numbers, the UK reported fewer than 2,000 cases yesterday for the first time since early September. Restrictions are now easing in England, with the reopening of non-essential retail and outdoor hospitality venues. Conversely however, parts of France are renewing school lockdowns, so there isn’t a uniformly rosy picture in Europe.

First quarter earnings season kicks into gear this week, with the highlights including a number of U.S. financials. The biggest names releasing this week include JPMorgan Chase, Wells Fargo, Goldman Sachs and Tesco on Wednesday. Then on Thursday we will hear from UnitedHealth Group, Bank of America, PepsiCo, Citigroup, Charles Schwab, BlackRock and Delta Air Lines. And on Friday, releases will include Morgan Stanley and BNY Mellon. The “beat the street” game should be in full force which means that reported expectations of earnings will be lower so that actual earnings numbers can impress market observers. The stock market has been rallying for more than a year in anticipation of a return to normalcy in the economy. The issue is the empirical reality that in historical terms the earnings of the S&P 500, for example, may not warrant the height of the market pricing. Although PE Ratio is an oversimplified estimate of what the market is worth, here is a look at that ratio historically: 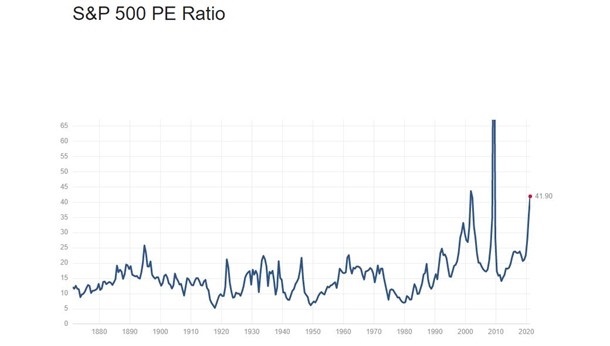 That one data point is looking quite bubblesque – that doesn’t mean we need to run for the exits, but it certainly means that we need to see a continuation of accelerating earnings growth, or things could get nasty fast. Of course, artificially suppressed interest rates and reckless spending by Congress are bolstering these stock price numbers in the near term, but that is a horrible long-term strategy that will likely end badly – so stay tuned!

On the economic macro-data front, the highlight this week will be the CPI (Consumer Price Index) report on Tuesday. Many are bracing for sharp increases in inflation numbers in the weeks/months ahead. This comes against the backdrop of a very strong jobs report for March and an ISM services reading that was the highest since the series began back in 1997. Deutsche Bank economists expect a blistering +0.48% month-on-month increase in the headline CPI, along with some strong releases elsewhere as well, with a projected +8.9% increase in retail sales for March thanks to the latest round of stimulus checks and payback from bad weather in February. Bank of America’s economists expect an even more blowout retail sales print, one in the 11%+ range.

On Friday China will release their first-quarter GDP number. Deutsche Bank economists expect a surge in growth to +21.3% year-on-year, up from +6.5% in Q4 as the comparison will now be against the quarter when the “pandemic” first impacted the Chinese economic numbers.

Also worthy of note are the treasury auctions coming up this week. Today the treasury will auction $58BN in 3-year notes, followed by $38BN 10-year notes. Tomorrow there will be a $24billion auction of 30-year bonds. As we mentioned in this post last week, the long end of the bond curve is at an interesting crossroads. It will be interesting to see how these auctions are received by the market – so definitely put this on the radar for an indicator of where long-term interest rates are heading.

This is a very action-packed week and next week we will be hearing from central bankers around the world. Their comments are often packaged in fancy terminology without legitimate substance, but the whole financial world will be watching – so sometimes there are reactions worth noting!