We are now entering 2nd quarter earnings season for all publicly traded companies.  This is where the rubber will meet the road for an answer to the dichotomy of tepid economic numbers along with a strong stock market that has launched off its March lows. Everyone knows that the corporate earnings numbers coming up for the second quarter will be terrible. But the estimates will be lowered to the point that the actual numbers will beat the estimates – which will essentially be like putting lipstick on a pig. The most important numbers to watch will be revenue numbers – which are much more difficult for corporate accounting departments to fiddle around with than the “earnings” numbers are. The million-dollar question going forward is how quickly the economy can recover from the recent disaster and justify the rebound in stock prices.

Last week the banks started earnings season of on a good note. JP Morgan’s record revenue had many investors sighing in relief, although their profit was roughly half of a year ago due to a beefing up of their loan loss provisions.  Other banks followed suit with better revenue numbers than profits, but some are skeptical the remainder of earnings season will not be so rosy.

We are relatively certain that Congress will jerry-rig more stimulus packages into the fall as it is quite obviously that there is no “V-shaped” recovery in the economy. What is truly mind-numbing is the deficit that our Federal Government is ringing up this year. From the Manhattan Institute, here is a visual look – and this estimate isn’t even inclusive of some of the new stimulus talk that is circulating DC right now… 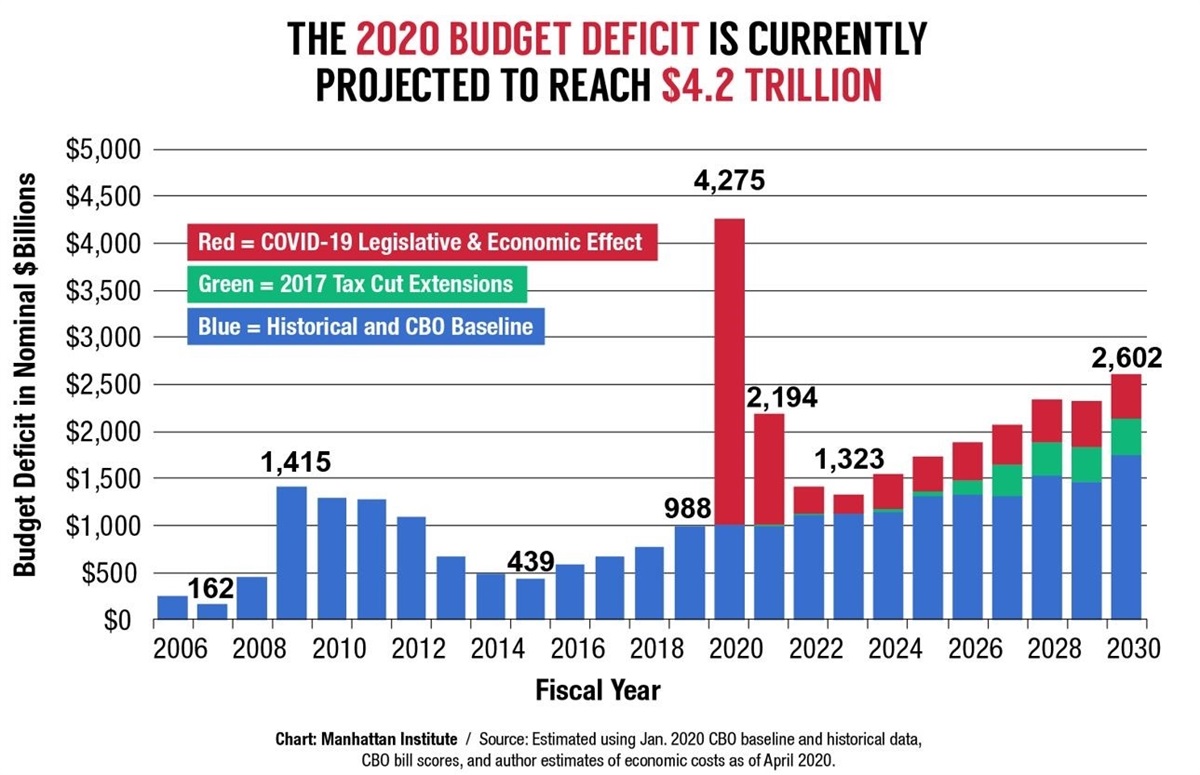 Of course, the “deficit” is the difference between the amount of money the government takes in from tax revenues and the amount of money it spends. This year revenues have cratered, and expenditures have rocketed – so we are looking at a Federal Government budget deficit that is THREE TIMES that of 2009 after the last economic disaster. Historically (other than WWII) the government could not have borrowed this much money to spend in a deficit scenario such as this. The investing marketplace would have been overwhelmed and the price of the bonds (all this government debt) would have been much lower, consequently interest rates would be much higher. However, now our Federal Reserve is buying most of these government bonds, so the interest rate that is being payed is miniscule (about .6% on 10-year notes!)

This monetization of national debt frees up the government to spend with reckless abandon because they don’t have to find other buyers for their bonds – and that is what is happening. Benefits and bailouts are being handed out to many and so for the short term asset prices are responding.  The stock market has rocketed back to new or near new all-time highs and it certainly appears that will continue until the economy has to stand on its own rather than get supported by the Fed and the government. Earnings season will not show a good economy and with unemployment numbers still about 11% - higher than at the worst of the last recession – the actual economic numbers are not roaring back. The rest of earnings season won’t be pretty, but right now that doesn’t matter to the stock market.  As we often say in these posts – don’t sell your gold!