Economic Divergence at the Big Banks

Strange things are afoot at the Circle K…

We know that this is not a perfect time to reference a second rate 80s comedy movie - Bill and Ted’s Excellent Adventure – we are supposed to be serious when writing about the financial world- right? But things have gotten topsy-turvy in our central bank manipulated world and our situation has ended up somewhat – well, almost a little comical.

For decades in the financial media, strong economic numbers imply that bonds should be selling off (interest rates rising) as investors leave the safety of bonds for the higher returns of equities. Of course, everything needs to be taken with a grain of salt now that we have a Federal Reserve buying bonds every month to the tune of $100-120 billion. But even with this whole Covid lockdown, American interest rates never got negative like much of the rest of the developed world. Then in the last few months the longer-term interest rates in the U.S. firmed up significantly as the economy has proven to be quite resilient. Clearly much of the economic resilience is due to reckless fiscal “stimuli” from our fearless leaders and that will have to be paid for at some point. But much of the rest of the world has been pulling similar shenanigans from a monetary and fiscal stimulus perspective and some places (check Australia for example) are in way worse shape than we are.

So, imagine our surprise last week when shockingly firmer economic data than what was expected came out AND BOND PRICES ROCKETED HIGHER!

These data included notable upside surprises on the part of the Empire and Philly Feds, a 193K drop in initial jobless claims vs expectations of only a 44K decline and a strong beat in terms of headline retail sales which jumped 9.8% m/m in Mar vs. 5.8% anticipated. One would expect a selloff in bonds, yet the rally took the 10yr interest rate almost back down to 1.5% and the 30- year rate touched 2.2%.

Our best guess for the reasoning behind this is the bond market pricing in (selling off because of) expectations of more reckless fiscal “stimulus” from the swamp in Washington DC. If the economy shows remarkable strength, then bad government “stimulus” is less likely, so the bonds have a relief rally…

But another anomaly in the financial world is the weakness of bank loans at the Big Four.  That may have more explanation for lower interest rates. The banks are having a relatively tough time finding people/businesses that want loans. So, the deposit side of banks is booming – stimulus checks being deposited. But the loans aren’t being originated on the other side. That is a very curious dichotomy considering the strong economic numbers that came out last week. Take a look at a long-term chart showing how weak loan demand is relative to the deposits on account. 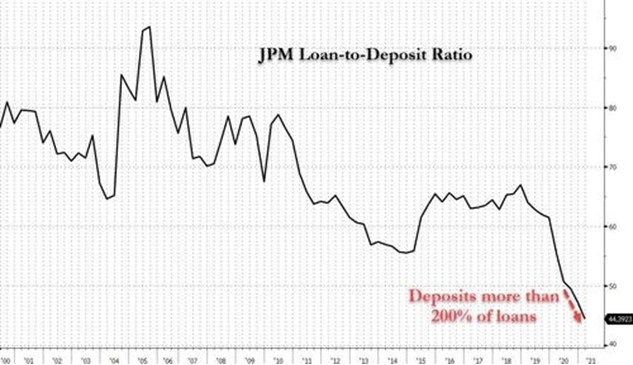 JP Morgan reported that in Q1 its total deposits rose by a whopping 24% Y/Y and up 6% from Q4, to $2.278 trillion, while the total amount of loans issued by the bank was virtually flat sequentially at $1.011 trillion, and down 4% from a year ago. That is a crazy reality and things aren’t any better at the other big banks.  An even more stunning divergence between total deposits and loans, emerges at Bank of America where deposits similarly hit a new all-time high of $1.88 trillion, even as the bank's loans have continued to shrink at an alarming, deleveraging (and deflationary) pace and are now at $911 billion. Bank of America has had negative loan growth for the last twelve years!!

Here are the aggregate numbers on a chart for the Big 4 – JP Morgan, B of A, Citibank, and Wells Fargo: 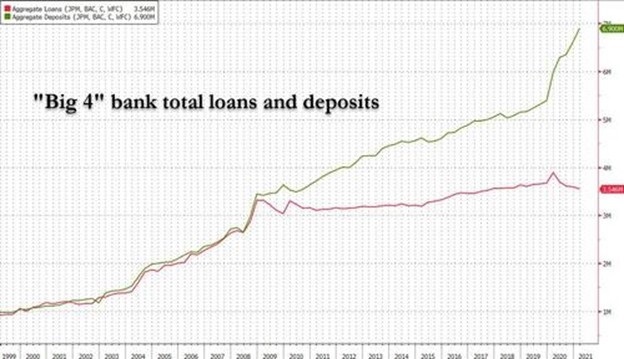 What is obvious in this chart is that while loans and deposits moved hand in hand for years, starting with the collapse of Schemin’ Brothers, loan creation has been virtually non-existent (total loans are now at levels seen at the time of Schemin’s collapse) while deposits have risen to just about $10 trillion. There are now far more deposits than loans at American Banks, nearly twice as many. It has been these deposits that have gotten into the asset markets rather than loans getting out to main street America – and it is accelerating.

So, what does all this mean? We believe that the banks will be forced to push loans as deposit growth is grinding to halt with the slowdown of QE. Loan growth can obviously be good for the economy – but the lack of that growth for the last decade with interest rates so crazy low has shown soft growth in the economy. Now banks will have to make loan terms very attractive for businesses and end consumers…

Will that bring about the inflation that much of the financial world is preparing for? Maybe – but only time will tell on that. What we do see is a continuation – an acceleration really – of some of the trends set in place by the 2008 meltdown. Asset prices continue up and interest rates remain in a downtrend and, as we have said many times – this certainly won’t end well, but it doesn’t look like doom is imminent. Of course, that can change quickly so stay tuned…