Happy New Year everyone!! Welcome to 2023 and our weekly financial market updates!!

Anyone paying attention to the Federal Reserve’s emergency COVID-19 policies knew that they were WAAAY too loose with financial conditions carrying all the way into the spring of 2022. They kept short-term interest rates at essentially zero and they were buying $120 billion monthly in the bond markets. When inflation started to hit, the Fed said that it was “transitory” and kept the proverbial hammer down. Now that inflation has screamed to 40-year highs the Fed is finally getting religion. For the past 8+ months, they have stopped propping up the bond markets to stratospheric levels and they have put a legitimate “cost to capital” on the front end of the yield curve with legitimate interest rates. Now the million-dollar question is whether they go too far and tighten monetary condition initiating a recession. Many financial pundits are wildly bearish saying that the Fed is initiating a financial Armageddon. We are certainly not in that camp, but we are concerned and here are the reasons why…

"US private sector firms brought 2022 to a close signaling marked obstacles to overcome with relation to the health of the economy. Contractions in output and new business were broad-based and gathered pace in December as customer unease led to dwindling demand and order postponements. 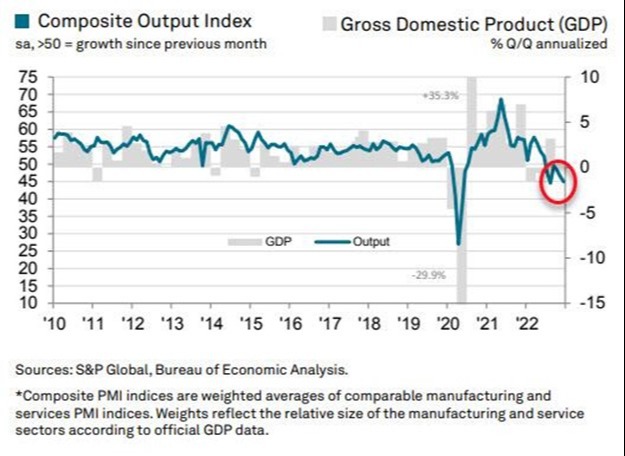 That picture speaks for itself and looks very negative. Some other concerning stats include…

Some of these things could clearly be one-off data points that we shouldn’t over emphasize. An obvious example is the home sales numbers. The real estate market was white hot in front of the Fed raising interest rates, so a big pullback is of course expected – which we have – but how long does it continue? We certainly see circumstances around the world that are more dire than they are here in America – and our asset markets are already reflecting some “flight to safety” from investors around the world.

On a positive note – and we have mentioned this repeatedly in recent weeks. All our capital markets are holding together remarkably well with interest rates on the short end so much higher than the last decade and with all the negativity in the financial media. This doesn’t mean that we don’t think asset markets – especially stocks – can’t go lower. We feel less risk in the market when a lot of fear is already baked into the current prices.