The energy situation plaguing Europe right now is no surprise to anyone as it has been front page news for months now being associated with the Russian invasion of Ukraine. From 20,000 feet, the reality of the situation is that Europe on a broad scale depends on Russia for about 40% of its total energy needs. That energy has been cut off and there is not any smooth transition to alternative sources. This winter is going to be difficult for Europe – the only question is how bad will it get? European leaders seem oddly indifferent to the obvious coming challenges and blaming Putin is about as far as most discussions get. We don’t see many efforts for solutions and some of the green advocates are pleased by the dysfunctionality of the European energy markets. We have seen reports of Germans out in the woods cutting down trees for the coming winter. The only good news there is that at least something is being done…

Now we have to ask the question of the fallout from Europe to the U.S. if the situation gets really bad overseas. Will America feel the brunt of the European energy crisis? The quick answer to that is no one knows for sure. When you look at the situation in Europe, you have to understand that the energy issue -being at the core of the economy – could have repercussions not yet accounted for – and things could get crazy with rolling blackouts, economic shutdowns, food shortages, price controls, and even freezing and starvation. We are not being alarmists and predicting these things, but the conditions are in the pot and again, considering the interdependency of the worlds’ economy, one has to consider the potential destabilization of the U.S. economy.

We are always looking at the financial markets for clues of how the fundamentals of the world’s economy are moving along. Of course, one indicator that we have frequently referenced is the weakness of the Japanese Yen on the currency stage. That will continue to be a concern of ours because it could cause big disruptions to the world’s money flows. Along that same vein, this week we take a look at the Euro vs the U.S. Dollar… 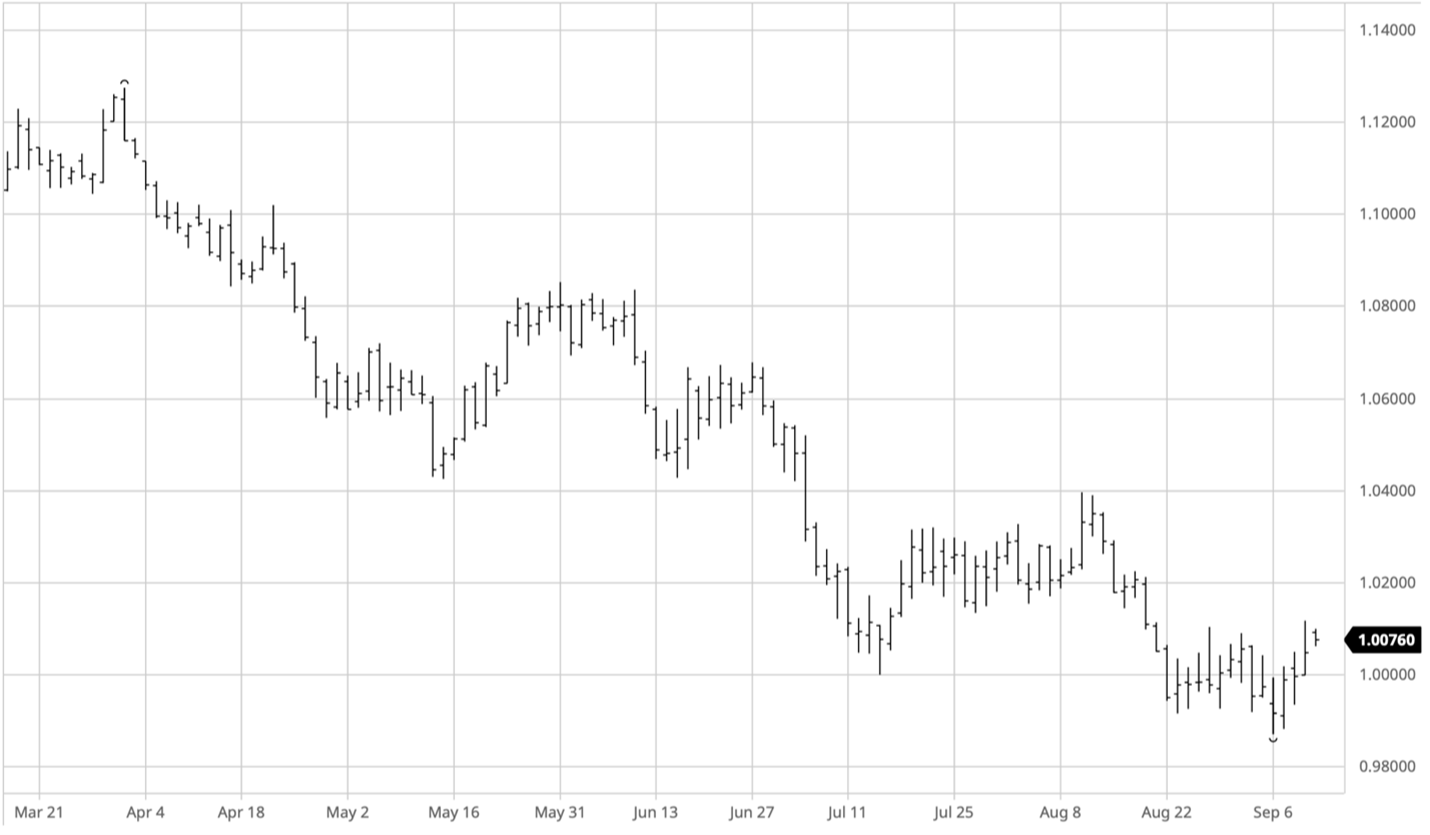 The Euro has been in the news recently because, as you can see on this chart, it traded at a discount to the U.S. Dollar for the first time in more than a decade. Of course, some of the systemic concerns that we listed above are what is driving the Euro to its recent weakness. We have always thought that the fundamental structure of the Euro was on a faulty foundation and recent weakness is a concern and supportive of our analysis. However, we do not see imminent doom in this chart or corresponding fundamental data coming out of Europe. Obviously, this could change quickly – especially if an early wave of cold air out of the Arctic highlight’s European energy challenges – but for now financial markets are holding together surprisingly well.

On the domestic front, crude oil has come down in price below $90 per barrel which has been a pleasant surprise. Our financial markets are boosted by foreign assets coming to our shores and the major stock indices are showing remarkable resilience. Coming up this week we have the inflation numbers out of the DOL. The average trade guess is about 8% so inflation is clearly coming down and the labor numbers which are of upmost concern when considering inflation are softening without a doubt. How the FED will manage getting the inflation genie back into the bottle and within their 2% target remains to be seen. The good news is that weaker economic numbers have caused pressure to come off of our asset markets. But let’s be careful betting on “bad news is good news” on the economic front. Our fears are that some of the inflation numbers coming down is due more to demand destruction rather than supply increasing. Clearly that is not very positive going forward. What that means on the investing front is we feel that this is a good opportunity to readjust portfolios if you feel you have had too much risk. Again, much of the pressure has come off of asset markets and we agree with raising cash by selling assets for investors that may have needs for funds in the near to medium term. The challenges in Europe do have the potential to escalate and spill over to the U.S. – so we need to prepare accordingly.