The upcoming week should be fairly quiet for the financial markets with China on holiday until Friday and the Vice-Presidential debate on Wednesday being the highlight event in the U.S. The only interest rate decision from the G20 central banks will be from the Reserve Bank of Australia on Tuesday and that should prove to be a benign no-rate-change decision. As far as economic data, the main highlight will be the release of the services and composite PMIs from around the world. Those will be out in the beginning of the week but expect China’s on Thursday after holidays. The second wave of the virus has affected the services sector across Europe with the PMI falling into contraction below 50 at a 47.6 reading. Germany and France are both in contraction with PMI readings at 49.1 and 48.5 respectively.

Looking at just the U.S., the key economic data releases this week are the ISM non-manufacturing index on Monday and initial jobless claims on Thursday. In addition, minutes from the September FOMC meeting will be released on Wednesday. There are numerous scheduled speaking engagements by Fed officials this week, including Fed Chair Powell on Tuesday and New York Fed President Williams on Wednesday.

Comparing the Eurozone to the U.S. shows quite stark differences. The Eurozone unemployment would be close to 11% if we used the same calculation as the United States. The OECD estimates that unemployment will rise above 10% in the eurozone before year-end as furlough schemes end. Here in the U.S., unemployment numbers have come down considerably from the height of covid lockdowns to less than 8%... 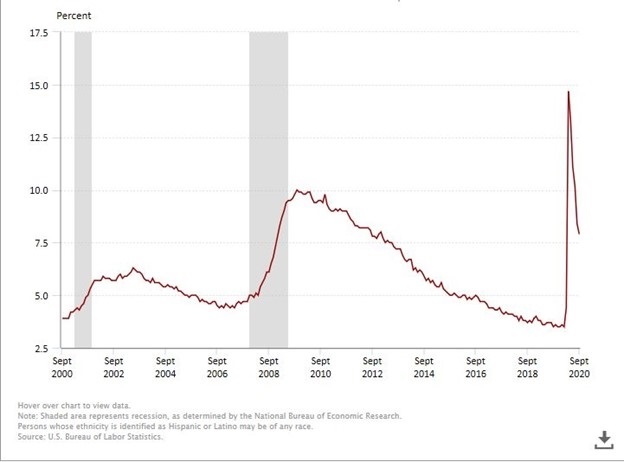 Many question the math of how the unemployment rate is calculated, so we may be artificially optimistic on these numbers. However, the comparison between the Euro Zone and the U.S. clearly shows a more resilient economy for us domestically. We are not the only ones who can identify this in the financial world. Many fund managers overseas are investing in the American markets which has helped buoy our indexes in these troubling economic times.

Going forward of course one has to put the election on the radar as a major source of volatility. The vast majority of investors — 93% — believe the presidential race will affect the stock market, according to a recent survey from Hartford Funds, an asset manager. Moreover, 84% said they expect that will impact their investing habits. Interestingly, most investors intuitively believe that a Republican presidency leads to better stock market returns. However, when you remove some of the outlying events since 1933, there is virtually NO difference in stock market returns whether the White House had a Republican or Democrat in office. This time around, people believe that with a Trump victory energy and small cap stocks will do well. If Biden wins infrastructure and health care may outperform. At the end of the day it is more likely that big differences - depending on who wins the White House - would be short term in nature. But in this day and age anything can happen – so stay alert!