We have the Thanksgiving holiday this week and many market observers seem ready for the break. We have seen such outrageous political headlines for quite some time now, that we are certainly not the only investors tired of reading that the world political/economic situation is in “uncharted waters.” Even world leaders are checking out for the near term – this is courtesy of Michael Every from Rabobank…

For example, we just had the virtual G-20 “held” in Saudi Arabia…and did anyone actually notice? Even media like Bloomberg, which would bleed G-20 if punctured, notes ‘One of the starkest moments…came when U.S. President Donald Trump skipped a session on the pandemic to hit the golf course. Just as telling was how many other leaders seem checked out.’ Putin arrived late, Spanish and French leaders were caught looking at their phones, and Boris Johnson looked ‘uncombed and reading from his notes’. Indeed, while ’many leaders are relieved to have Joe Biden take over as U.S. president… they think four years of ”America First” cannot be easily undone, according to officials present.”

Specifically, to the markets, we are now seeing management shops like Morgan Stanley doubting the rally in stocks. The bank's chief U.S. equity strategist Michael Wilson - is bullish over the next 12 months seeing a 10% increase in the broader market, yet bearish into year end, expecting another corrective "drawdown" in the S&P500. Some other things are emerging that are of concern for the near term in stocks as well. We are seeing some worrying signs in the credit world. According to credit-ratings agency Standard & Poor's ("S&P"), 129 U.S. companies have defaulted on their debt so far this year... the most since 192 defaulted in 2009. On top of that, so far this year S&P has downgraded the credit of more than 2,100 companies, including more than 1,000 in the second quarter. That is already more than any year on record. This tells us clearly that we'll see many more defaults in the months ahead. Today, the default rate for U.S. corporations is around 6% – up from 3% at the start of the year. It is clear that this number is headed higher when you look at the "weakest links.“ Weakest links are companies with already-poor credit ratings ("B-" or lower) that are on negative credit watches or with negative credit outlooks from S&P. The number of weakest links in the U.S. IS NOW MORE THAN 400 COMPANIES!! That's nearly double the 235 weakest links in March 2009 during the last financial crisis and the default rate for the weakest-link companies is around five times higher than the overall default rate. S&P forecasts that the high-yield default rate will rise to 12.5% by June 2021. That would be the highest default rate since the Great Depression in 1932. S&P's current "pessimistic" forecast projects the default rate to reach 15.5%. A 12.5% default rate means another 240 companies will go bankrupt over the next year. A 15.5% rate means more than 300 companies will go under – which is obviously a staggering number. When you look at how big the corporate debt pile has gotten over the last few years – the discussion has different context. 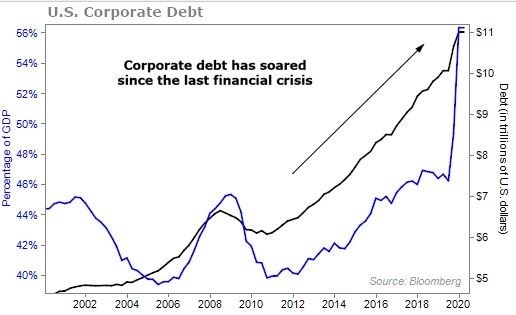 Of course, the situation looks dire – like we are going to be walking into big problems with corporate debt. But the variable that we can’t quantify in this equation is what the Federal Reserve will do. They backstopped a lot of corporate debt after the “pandemic” hit.  The FED has already purchased a lot of corporate bond ETFs and it has the capacity to buy some $250 billion more. We find it hard to believe that the FED would back away and leave these debt markets to themselves if panic started to hit. Obviously if that did happen there would be enormous damage to the bond and stock markets. So, for now, investors seem content with the idea that the FED has their back. We will keep the sketchy corporate bonds on our radar and continue to evaluate.