Tumultuous market trading has settled down over the last couple weeks with the VIX (volatility index) settling well back below forty. However, this week we will be bombarded with the peak week of Q1 earnings as well as announcements from the Federal Reserve and ECB on policy decisions. The BOJ has reiterated a no holds barred type policy of asset purchasing already. "This coming week will be huge from a macro data perspective and the extent to which the global economy has been floored by Covid-19," said Simon Ballard, chief economist at First Abu Dhabi Bank. Starting with earnings, DB's Jim Reid notes that the first quarter earnings season hits a climax this week, with a third, or some 173 companies in the S&P 500 reporting, along with a further 95 in the STOXX 600.

Overall analysts expect a decline of nearly 15% in first-quarter earnings of S&P 500 companies. In actuality, so far, this earnings season that is more like a decline of 24% - with profits for the energy sector estimated to have slumped 68%. While 65% of U.S. companies that have reported beat estimates (vs 50% in Europe and Japan), this represents the worst margin in a decade. The U.S.  credit card companies are a must to watch as we expect severe deterioration in credit quality among U.S.  consumers and will be a good leading indicator on the health of the consumer. The remainder of earnings season will have to perk up to meet the “only” 15% drop expectations. As far as the earnings going forward, 90% of those reporting have removed forward guidance adding uncertainty.

This week sees a number of high-profile releases of economic data that will be of interest to market participants. The first look at Q1 GDP readings will be closely watched, with the U.S.  reporting on Wednesday (BofA expects real GDP to plunge 7% in 1Q,) and the Euro Area following on Thursday. Attention will also fall on initial jobless claims which are likely to increase another 3.5M for the week ending April 25. That would bring the total for the past 6 weeks to 30 million workers laid off!! That is nearly 23% of the entire U.S. workforce. We will also see reports of ISM manufacturing numbers and consumer confidence. Core inflation numbers will likely be little changed…

Everyone wants to know if the bear market is over and the all-clear signal can be raised for stock investing. We are quite surprised at the fact that the S&P 500 trades just 17% below its all-time high amid the largest economic shock in nearly a century. However, below the surface of the market, the median S&P 500 constituent trades 28% below its record high. This 11-percentage point gap is one measure of market breadth and is caused by the Big 5 (MSFT, AAPL, AMZN, GOOGL, FB) now account for more than 20% of the S&P 500. That is a new, all-time-record which rings of past market peaks rather than corrections. A broader market participation would make for a more comfortable market rally. Another concern from a technical standpoint about the market rally is declining trading volumes as the market goes rebounds. This is generally an indicator the rally may be running out of steam. 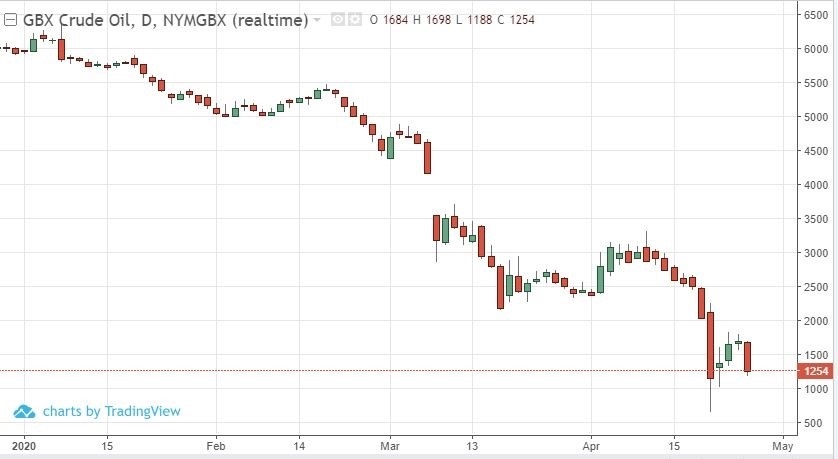 And finally, here is a picture of the state of the energy markets – a chart of crude oil. This is the most important commodity in the world and the driving force behind all the world’s economies. We have mentioned many times in the last few years that the price of crude oil drastically declining would concern us about the condition of the world economy. That has obviously happened, and we are concerned. The impact of commodity pricing over the last two months is breaking supply chains of all sorts of goods and services – the full implications to the total economy no one yet knows. Enjoy the week!