When we are describing conditions in the financial markets, interest rates are of very high concern and commonly mentioned at the forefront. We need to understand that there are many different interest rates in the world economy, but they are all essentially the price of money – so they are really the most important prices at the foundation of our money systems. Now, the most obvious interest rate – and the one that we complain about most in this post – is the “discount rate” which is essentially the short-term interest rate which companies can borrow, and it is set by the Federal Reserve. We have been pounding it for years now that the Federal Reserve is in dereliction of its duty as steward of our monetary system specifically with regard to how low they have kept the short-term rates that they are explicitly responsible for and they have kept them too low FOR DECADES. Former Federal Reserve Chairman Alan Greenspan was too quick to reduce interest rates after the “dot bomb” in 2001-02-03. Former Federal Reserve Chair Janet Yellen left the discount rate at essentially zero for MORE THAN EIGHT YEARS after the 2008 disaster. That’s right, emergency policies of zero interest rates (free money) kept going for eight years. Speaking of emergency policies, the Fed still has interest rates at zero due to this Covid-19 mess – plus they are buying $120 billion of bonds in the market to keep long term interest rates down too. This is in the face of a white-hot residential housing market where demand is so high that materials are tough to source and outrageously higher in price. There are many other economic indicators other than the housing market that should be enough for the Fed to remove their emergency monetary measures. But they still have the pedal to the metal. The result of the price of money being next to zero is an explosion of debt across the entire developed world and wild speculative excesses in many asset markets. By many measures the stock market is more expensive (in America) than it has ever been in history. But my favorite example of how insane markets have gotten is in the art/collectible world. At a recent art auction an Italian sculptor sold his “invisible” sculpture for $18,300. This is not an Onion article. There is nothing there, but the “sculpture” sold for more than half of the median annual income for America. Of course, that is just one data point, but it shows some of the ridiculousness being fueled by central banks across the developed world.

Of course, invisible sculptures aren’t going to get any traction in the mainstream art appreciation world, but the ridiculousness of low interest rates is all around us and is really the underlying fuel for silliness in asset markets.  American corporations have binged on these low interest rates ringing up a total of more than $10 trillion in debt. By some analysis 20% of American companies are now “zombie” companies. Meaning their profit margin is below their cost of capital, so they have to keep borrowing money in order to stay in business. What would happen if the Fed changed short term interest rates back to something more normal AND they allowed longer term interest rates to rise?  Likely we would have a deflationary implosion if the Fed’s profligacy came to an end. The kicker that we still have a tough time getting a handle on is the SOVEREIGN debt overseas (mostly Japan and Western Europe) that is actually yielding a negative interest rate. That is not from an Onion article either. We have more than $13 trillion of worldwide sovereign debt that you are guaranteed to lose money if you buy and hold to maturity. It is not surprising that the vast majority of this negative yielding debt is owned by Central Banks who are buying the debt with money that is someone else’s (taxpayers.) 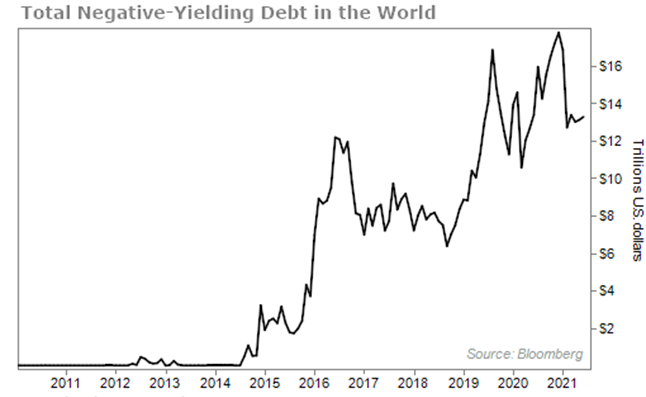 Many of the traditional measures by which asset prices are valued break down when interest rates are negative. Bear in mind, we are NOT predicting immediate doom of the world economy and of financial markets. Look at the chart above and you can see that the negative-yielding circus in government bonds started almost a decade ago. No one knows how much more debt will end up on this negative yielding chart – and no one can time the demise of a monetary system. However, we do know that there will be consequences. One would hope that the Federal Reserve would start to remove some of this excess in terms of pricing capital for free and stop buying assets that the open market should find a buyer for. We are not sure if that could right the ship or not, but sadly we doubt the Federal Reserve is going to attempt more discipline so we could find out.