Distortions in financial markets continue as the Federal Reserve tries to engineer a normalization of interest rates. Of course, inflation gets the biggest headlines in the financial news out there with the latest Consumer Price Index numbers coming in at 9.1% year over year! Those are the highest inflation numbers that the US has had in 40 years so of course we understand that making the headlines. But getting less attention are the interest rates on the longer end of the yield curve. Treasury rates on the 10-year note as of June 14th were about 3.5% which was the highest in more than 10 years. However, in just the last few weeks 10-year treasury yields have come way in. As a matter of fact, they have come so far in (2.6% in the last week) that they are less than 2-year yields. That’s right – 2-year interest rates have printed in the last week almost .5% HIGHER than the 10-year rate. This is what’s called an inverted yield curve – it doesn’t make intuitive sense for short term interest rates to be higher than long term- interest rates. Think about it, for someone to use your money for 10 years rather than just two years, they should have to pay you a higher interest rate, right? Well, that’s not what’s going on right now and historically that has been one of the most dependable indicators that a recession is on the horizon. By some measures we are in already a recession even as some political leaders are indicating otherwise.

We are in uncharted waters with respect to the economic and monetary environment. The Federal Reserve is raising short term interest rates into already inverted yield curve. Let’s take a look at a picture of the recent history of inverted yield curve and corresponding recessions. 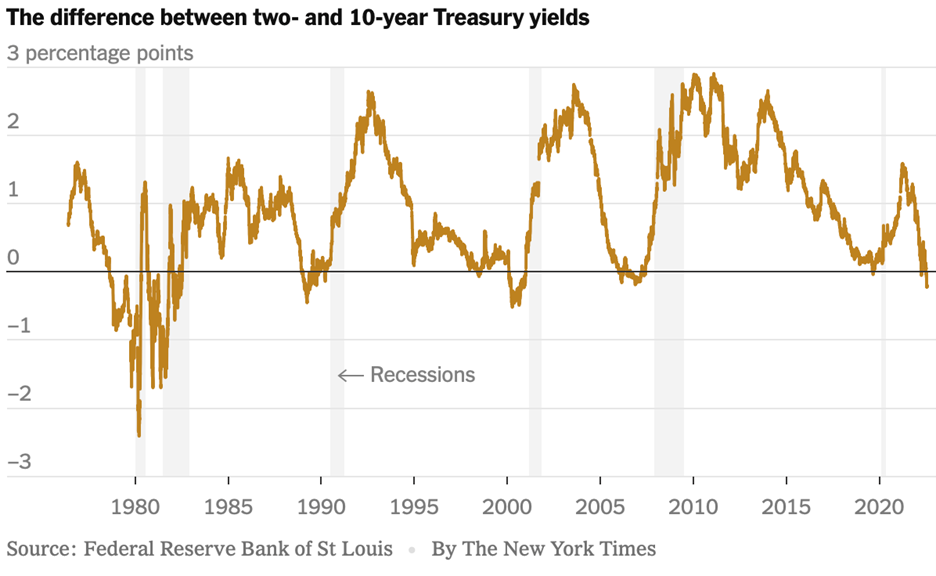 One surprising part of the inversion of the yield curve is our current inflation situation. We have the highest inflation in the US that we have had since Volcker shocked markets in 1980 with his raising of short-term interest rates to 20%. Short term interest rates being higher than on the long end of the curve is understandable in that situation. Now one would think that long term bond investors would fear inflation and be demanding much higher interest rates. The Fed has ceased it’s purchases of these assets also, so the artificial pushing down of interest rates has concluded. Clearly the financial markets think that there is an economic slowdown in the cards.

Another factor that is unique to our current economic situation is the breakdown of supply chains due to geopolitical factors, energy issues and the wake of the Covid lockdowns. This is where the Fed got some of the talking points about inflation being transitory. Economics laureate Milton Friedman once said, “Inflation is always and everywhere a monetary phenomenon in the sense that it is and can be produced only by a more rapid increase in the quantity of money than in output.”

I will respectfully disagree with Mr. Friedman in that at least some of the inflation you see now is NOT a monetary issue and eventually will subside.

One common criticism is that the yield curve tells us little about when a recession will start, only that there probably will be one. The average time to a recession after two-year yields have risen above 10-year yields is 19 months, according to data from Deutsche Bank. But the range runs from six months to four years. That is a pretty wide window so how much is this indicator really telling us.

Also keep in mind that the Federal Reserve has been buying treasuries and other assets in the open market for years now. They have aggregated some $9 trillion in assets and especially since the 2020 covid meltdown, the Fed has eliminated normal price discovery. The Fed created trillions of $ and poured it into financial markets so clearly normal historical price indicators are going to be distorted.

It doesn’t take a Rhode’s Scholar to anticipate inflation in that scenario, but now that the Fed is trying to mop up some of that liquidity with higher interest rates there are going to be unintended consequences. The Fed can’t control everything. One of the interesting economic indicators that the Fed watches closely is the employment numbers. When the labor market is tight, that is usually considered one of the big indicators that will be running hot.

Well, employment numbers including new jobs created were huge last week – really surprising the market showing economic strength. However, when you look under the hood of the strong employment report, things don’t look so rosy. The wage growth is slowing the majority of new jobs were in the services sector and we have a new record number of people with multiple jobs. So, the number on the surface will give the Federal Reserve further reason to continue raising interest rates and the recent rebound in the stock market will add to the Fed’s courage to raise interest rates again in September.

Let’s not get too excited and load up the credit card on a late summer vacation though. The inverted yield curve – although perfect is still saying things are slowing down. Only time will tell how much things will slow down, but if your portfolio is too risky right now this is the time to lighten up.