Stephanie Kelton, a professor at Stony Brook University recently turned up the apple cart in normal economic/monetary thinking with her book The Deficit Myth: Modern Monetary Theory and the Birth of the People’s Economy. Kelton also has served as chief economist on the Senate Budget Committee. In her book Kelton’s basic premise is that there is nothing necessarily wrong with running a deficit and accumulating debt on a sovereign national government level…

“What if the federal budget is fundamentally different than your household budget? What if I showed you that the deficit bogeyman isn’t real? What if I could convince you that we can have an economy that puts people and the planet first? That finding the money is not the problem?”

This post is not a book report – as we have not read and dissected it, however the book has gotten a lot of press and certain tenets of it have spilled over into a lot of our political discourse and into the actions of our Federal Reserve – so it is worth discussing!

According to Wikipedia, MMT is “a macroeconomic theory that describes the currency as a public monopoly and unemployment as the evidence that a currency monopolist is restricting the supply of the financial assets needed to pay taxes and satisfy savings desires.”

First, an obvious comment is how the entire work is packaged from the get-go in the title of Kelton’s book “…the Birth of the People’s Economy.” That rings more of a manifesto than a statistically backed scientific theory - and the fanatical political adhesion to this mantra is chilling. Indeed, the “Green New Deal,” for all of the planet-saving ideals it has that may be worthwhile, it has NO basis in any economic reality. It is truly a fairy tale devoid of authentic strategies to build a bridge between the energy processes we have today to the desired “renewable energy” usage of the future.  Yet it is being co-marketed with MMT by some in D.C. that are further left on the political spectrum and getting a disturbing amount of traction (including with the supposedly “centrist” Biden campaign.)

Another observation of MMT is that is seems to gloss over the abundant economic research that shows productivity numbers DECLINING significantly over time as a system loads up on debt. Study after study in the developed world has shown the inverse relationship between growth and debt – MMT doesn’t properly address this. Printing dollars doesn’t help, because dollars are not “money” dollars are debt too (a liability on the Fed’s balance sheet.)

That brings us to the actions of the Federal Reserve in their asset purchases which is just a derivative of the MMT government spending strategy. Ever since the 2008 economic meltdown, the Fed has artificially suppressed interest rates by buying treasury bonds and other debt instruments – now aggregating approximately $7 trillion which is a full order of magnitude larger than just 13 years ago! 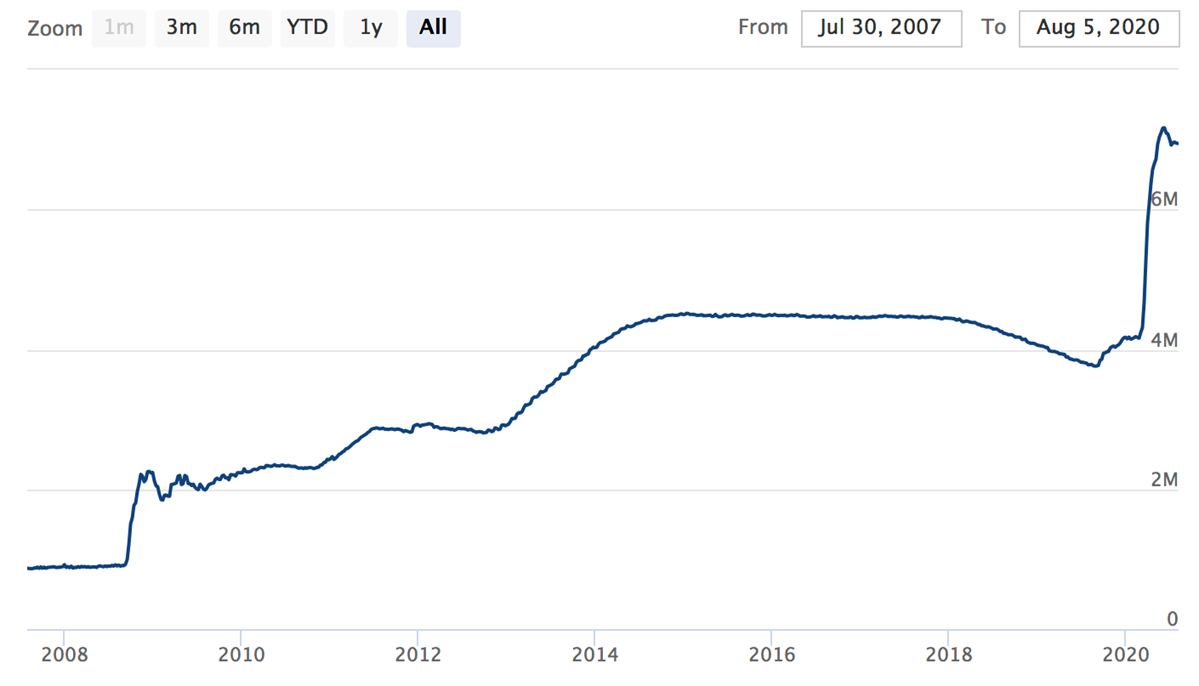 The goal posts of the “mandates” of the Fed continually get moved by Congress and by the Fed itself and now the Fed is backstopping a truly staggering amount of our financial system’s debt. Buying junk bonds seems preposterous for the Fed to be doing and that is a common complaint among worried observers. However, that is just the tip of the iceberg. If the Fed’s perpetual bids were pulled back and markets were left to stand on their own two feet, we believe there would be a downward tsunami in asset prices. Of course, the Fed can’t let that happen so the charade goes on - the government/Fed conjure up capital and purchase assets at over-inflated prices, debasing and consuming capital in the meantime in the name of “stimulus.”

The present state of our fiscal and monetary policies in the developed world are an experiment on a scale that the world has never even contemplated before. Modern Monetary Theory is really not a theory, but rainbows and unicorns fantasy of free lunches for everyone – and it is administered by the government. History is replete with different versions of this “theory”, but the government designed and controlled part of it reeks of the Soviet experience in Eastern Europe.  Not a good sign…

The good news is that technologies in a wide array of industries are going parabolic, which by its nature is very deflationary. Printing or loaning new “money” into existence isn’t spreading wealth – it’s just spreading more claims upon the wealth that people and business actually do produce.  Many of these new technologies are making true wealth creation much easier and, in the process, holding breakaway inflation (other than in asset prices) at bay. Of course, we have no idea how long that can continue if the Fed continues expanding monetary policy to the degree it has recently. So, as always, we will tell you – don’t sell your gold and stay tuned as this continues to be fascinating!