Take a look at the last 30 years in interest rates… 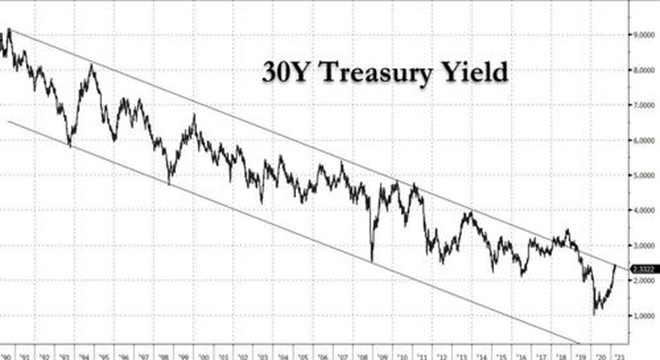 Now Goldman Sachs is labeling this the most interesting chart in finance as the long-term treasury yields push up against the decades-long downtrend. The obvious question is – what happens if interest rates push up higher through this descending trading range? Lots of assets are financed by these long-term rates and of course it is not limited to housing, when we talk about 30-year rates, housing and fixed-rate mortgages is often where the discussion goes.

The recent rally in the price of homes/residential real estate is reminiscent of the boom previous to the 2008 bust. Very often the culprit of the 2008 meltdown – or at least the catalyst of – was the sub-prime mortgage. At the time, anyone paying attention understood that the rally in home prices wasn’t authentic – driven of consistent demand over supply – but instead it was a debt fueled frenzy. The acronym label “NINJA Loan” came about in 2006 referring to the No Income, No Job and no Asset having mortgage borrowers that the banking system originated a loan for anyway. Although anecdotally we are beginning to hear of similar financing from the behind the scenes, to this point in the real estate boom we were more concerned about the manipulation by government decree that was slowing/halting defaults that may have kept a lid on the market if the marketplace had been allowed to take its natural course. (Of course the Fed is also buying some $40 billion per month of mortgaged backed bonds this time around which is larger than the last cycle Freddie/Fannie artificial financing.)

But now, our government is worried about the situation a few months from now when some of the default moratoriums expire in September. The Consumer Financial Protection Bureau (CFPB) warned mortgage firms last Thursday "to take all necessary steps now to prevent a wave of avoidable foreclosures this fall." As of March 30, approximately 2.54 million homeowners remain in forbearance or about 4.8% of all mortgages, according to the latest data from Black Knight's McDash Flash Forbearance Tracker. That math is pretty easy, because total mortgage debt in America is right at $10 trillion – so we are talking about almost HALF A TRILLION DOLLARS OF MORTGAGE DEBT IS CURRENTLY IN FORBEARANCE. We have no idea what the CFPB means regarding steps mortgage firms can take prior to September, but if forced to guess – we would say that people in forbearance will probably get more reprieve come the fall funded by U.S. taxpayer dollars. The halves vs halve not situation in this country continues to widen – government “stimulus” making it DRASTICALLY worse – and we would guess that this will not change.  So, the Fed will continue pouring more easy credit on the “everything bubble” and we are guessing that the mortgage forbearance “crisis” coming up in a few months will get papered over by the Fed just like other monetary/economic dilemmas of the past few decades…

We continue to look for the cracks in the dam, and although we are concerned that the real estate market has gotten out of hand 2006-07 style, we don’t see the subprime mortgage-type obvious warning sign yet that could trigger a meltdown. The Fed is managing this situation knowing what happened last time – but they are not forward looking and when the catalyst comes that can send real estate or other asset prices into a tailspin, the Fed (and other central banks) will still be looking in the rear-view mirror. Obviously, that doesn’t end well – but for now the party is still going, so hang on!!