The biggest news in the financial markets recently comes from an unusual situation in the stock of Gamestop. A week ago, this was a $40 stock, with the company losing well over $4 a share which is pretty typical in the retail world right now. But then then the stock price ran up to almost $500. How did this come to pass?

The stock was heavily shorted. Meaning speculative investors were expecting the share price to go down. In fact, there were more shares short-sold than were actually in the “float” – how that happens is a subject for a different post. But the point of the matter was that a rising stock price would mean a lot of hedge funds would be losing money sitting “short” the stock.

There are a lot of moving parts in this story, but the basic theme is that a band of small investors were the catalyst for the short covering rally that cost some Wall Street mainstays serious money – tens of billions of dollars in fact. Discussion of the particulars of this situation have evolved into a David vs. Goliath sort of story and many people feel a serious gratification from the fact that these rogue traders intentionally picked a fight with the big whales and won. We understand this mentality – regular readers of our post know that we are free market enthusiasts. Although there is some regulation necessary to ensure free markets, developed world financial markets clearly being “regulated” for the benefit of the big players rather than for the little players. This feeling was reinforced when trading of Gamestop was halted (supposedly initiated by regulators) for retail traders in order to give the well-connected hedge funds some time to manage the positions that they were losing buckets of money on. The irony of a company called “Robin Hood” becoming one of the mechanisms to lock small traders out of continuing to buy Gamestop and “stick it to” some big Wall Street funds is precious. We are waiting to hear how regulators will “fix the problem” as it seems to us that they have played an instrumental role in creating many of these problems. More regulation would cause more problems. Bad things happen in free markets – and this is a lesson that needs to be relearned by market participants periodically.

Success of the band of small investors (WallStreetBets) wasn’t limited to Gamestop. There have been enormous short covering rallies in a number of stocks and now the crew is turning their target to silver.  Historically, silver has been a monetary mechanism. It has represented money for millennia and has only recently been relegated to being an industrial and ornamental product. We believe that the estimation of the big bank manipulation of silver (and gold) prices are DRASTICALLY overreported. However, the delivery mechanism of the silver futures contract and the distribution system of the commodity in general are manipulated and woefully behind the times technologically so a forest fire is overdue. Silver is already up 20% in the last week… 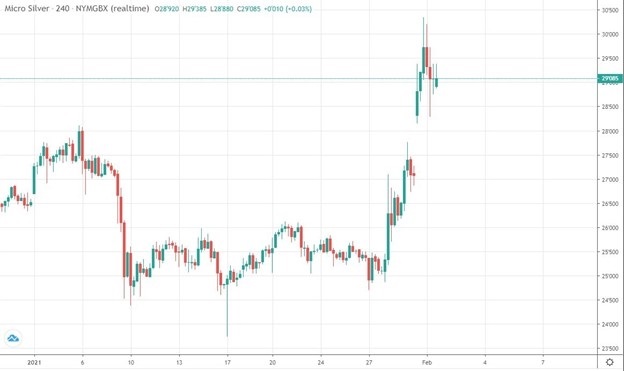 We seriously doubt the possibility of silver rocketing higher to the degree that the Gamestop or other short covering rallies in stocks managed. First and foremost, this is a world-wide commodity and the “market cap” or basically the dollar worth of silver is some 30 times that of Gamestop before it rallied. Some of the silver producing mine stocks have rallied, but they didn’t have the buildup of short positions that originally motivated the WallStreetBets traders to congregate and buy. However, in a world of central bank profligacy that has descended into monetary madness, the conditions are right for a rally in one of the world’s original monetary instruments. How far that rally goes remains to be seen, but for now the trend in precious metals is higher. Regards and good investing.