Question for the Federal Reserve

In our weekly post, we do our best to make sense of the complex world of the financial markets we are all invested in between stocks, bonds, real estate and commodities. The financial world is immensely complex with billions of participants and moving parts including government regulators, producers, consumers and parasites. Regular readers are aware that we are very skeptical of the basic concept of the Federal Reserve. The idea that one entity or small group of people would have the power to set interest rate policy for the world’s reserve currency seems fundamentally dangerous. On top of that, the Federal Reserve has clearly extended past its “mandate” and attained a full stewardship roll of our economy, and by extension the entire world’s economy. One of the justifications of that discusses the FED having the capacity to guide the economy out of harm’s way when extreme events happen. Obviously, the last year and a half in the world has been an extreme event and the FED has undergone unprecedented actions in order to save the world economy.

Whether or not the SUNAMI of liquidity that the Fed conjured and released on the financial markets last spring was justifiable is a topic for a different discussion. It happened and here we are after an economic “recovery.”

The FED’s balance sheet has basically doubled in the last year and a half – rounding the edges, let’s say it went from $4 trillion before the “pandemic” to $8 trillion now. The FED has bought everything except the kitchen sink in the bond market (including some corporate junk bonds last spring.) The FED has essentially nationalized the bond market keeping interest rates artificially low and conjuring dollars to purchase assets in the open market. Whether or not our central bank should have intervened to the degree that it did – now the economy is clearly back on firmer footing and we don’t need emergency actions. However, the FED is currently buying $80 billion in treasuries and $40 trillion in Mortgage Backed Securities PER MONTH!! The stock market is red hot, the residential real estate market is WHITE HOT, people are really starting to worry about inflation, and yet the FED still has the peddle to the metal! Of course, one chart won’t tell the whole story, but here is an interesting indicator of how ridiculous the policies of our central bank are – Retail Sales… 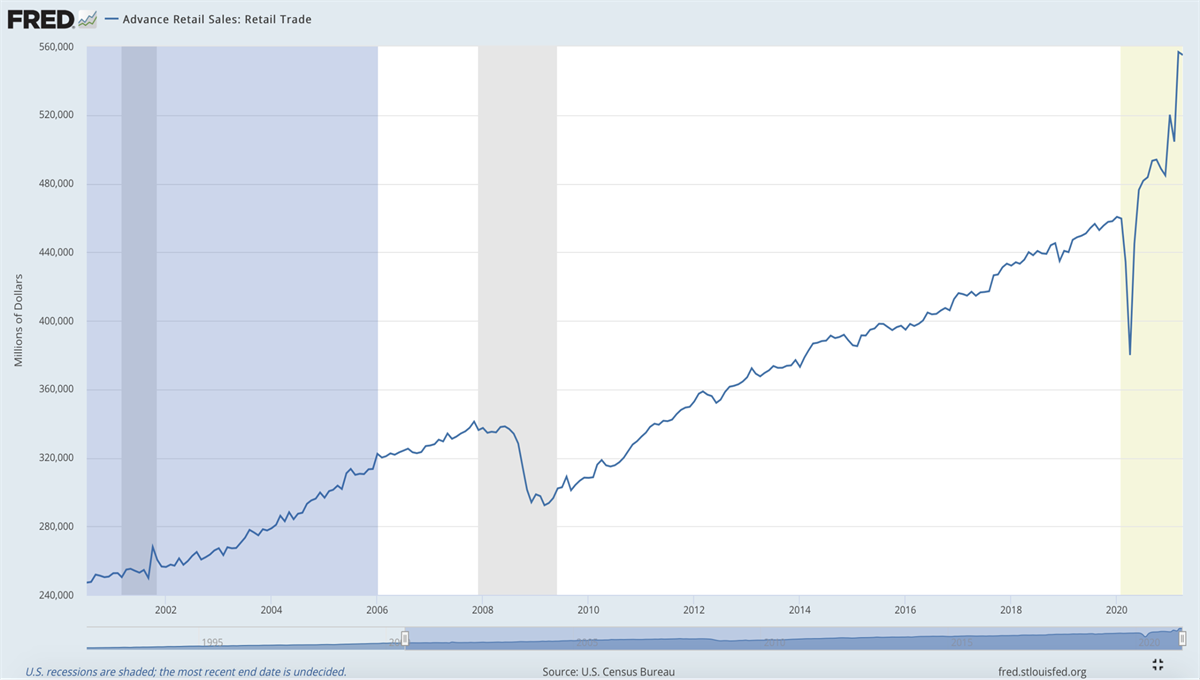 Retail sales have remarkably consistent growth over the years. In this chart you can see 20 years of roughly 3% annualized growth – of course minus the 2008 crash. At the beginning of the “pandemic” of course retail sales cratered. Now however, we are screaming higher AT MORE THAN 15% ABOVE THE LONG-TERM TREND LINE AVERAGE!!  Asset prices are launching as we mentioned above - and the FED still has emergency policies in place? This is madness…

Of course, the crazy policies of artificially low interest rates and buying treasury bonds have an obvious consequence of empowering Congress to go on a spending spree. Last fiscal year (2020) our government rang up more than a $3 trillion budget deficit. This year it will be north of $2 trillion and new spending plans out of our fearless leaders indicate the deficit next year will be approximately $2 trillion as well. Much of the Federal spending has gone to bail out reckless state governments and typical Washington DC pork barrel spending on projects for elected leaders’ cronies. Historically, governments around the world have at least had policies to attempt to limit budget deficits to 3% of their country’s GDP. We are staring at a budget deficit here of north of 10% of our GDP and there is really no end in sight. The total national debt has rocketed north of $28 trillion and now is a number so ambiguous that it seems irrelevant/trivial. The world has never seen financial recklessness on a scale such as this. We are not predicting when this will end – but we will say that doom does not seem imminent to us. Of course, things can change quickly in a system so leveraged and one must be cautious, so in the meantime don’t sell your gold J

Our simple question for the Federal Reserve policy makers is this: Where is the emergency that warrants your present monetary policies?