Risk On or Risk Off?

The roller coaster in the stock market continues with volatility last week returning to the type of panic moves as we had in March. Trying to make sense of markets with economic numbers in full out depression territory and a corresponding best 50 day run in the history of the stock market has left many scratching their head. Really markets have been ping-ponging on the news du jour with a backdrop of a FED put – aka the FED is going to backstop everything.

So, the market is performing remarkably well considering underlying economic conditions and now some of the investment houses are starting to extrapolate this performance going forward, which may be indicative of some short-term froth in the market. One notable example is Morgan Stanley equity strategist Michael Wilson flipping from bear to bull by raising his 12-month, June 2021 S&P target to what would be an all-time high 3,350, from the current 3,000: Our new target of 3,350 assumes a multiple of 20x forward 12- month earnings of $168. His numbers don’t make much sense to us, but it is an indicator of some of the market sentiment recently turning bullish.

Some market indicators speak to things being in full bubble status just three short months after the world being in an economic depression. The most obvious example of this is the stock price of car rental company Hertz. The company has filed for Chapter 11 bankruptcy, has bond prices indicating a shareholder equity value of the company of about MINUS $2 billion and they are doing a common stock issuing through Jefferies as we write. This stock issue is raising about $500 million and in their offering documents Hertz attorneys warn multiple times that any investment in the stock could easily become worthless. The stock is still trading over $2.5 per share as we write. This is statistical madness as new stockholders would need something approximating a miracle to avoid total loss – or maybe they just need a bigger fool to buy the worthless stock from them at a higher price. This won’t end well for Hertz, but it also concerns us about the conditions of a market that would support recklessness such as this.

What is concerning for us as we watch the world emerge from a virus-induced hibernation are some of the empirical realities that don’t indicate a V-shaped recovery. The most recent example of this is the Monthly Treasury Statement for May which showed federal withheld income tax receipts falling a record 33% from the comparable period one year ago. The decline in May tax receipts exceeds the 30% decline in April. Monthly tax (gross) receipts have been reported since 1973 and April and May declines are the largest on record.  Federal withheld tax receipts are directly related to workers paychecks. The scale of the decline in tax receipts is nearly three times the decline in reported household and payroll employment. The unprecedented gap raises questions about the accuracy of the April and May employment reports which were showing improvements in our employment situation. Time will tell but here is our list of concerns going forward including short, medium, and long-term issues… 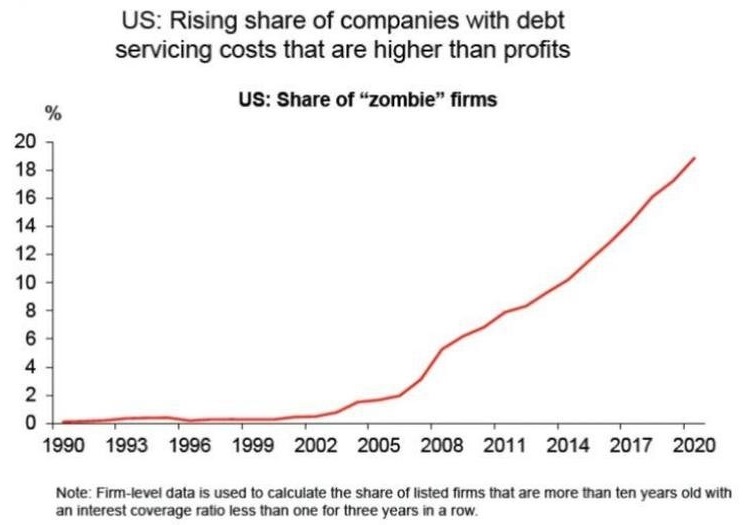 Zombie companies are those that don’t make enough money to pay down their own debt, so they are dependent upon low interest rates and a continual growth of their debt. This keeps the economy from reallocated misused resources, and it is a daunting problem.

Of course, the Federal Reserve has committed to backstopping all investors in the face of these risks and to this point it has kept markets together very well. The rubber will meet the road when earnings season rolls around again next month, and we will see the 2nd quarter numbers which will be horrific. The market knows that already though, so we are certainly not suggesting panic out of all risk assets. We do, however, feel it is wise to hold significant cash in investment portfolios as we feel there will be more opportunities going forward without chasing markets higher.