A consistent theme in our weekly post has been a concern over potential weakness in the U.S. Dollar.  This anxiety is largely due to the performance of the Federal Reserve which has been dismal for decades. They have simply provided more dollars whenever economic conditions worsen – and they have not sufficiently pulled the reigns back when the economy has done well. Often times they tell the public one thing and have conversations with financial institutions that paint a different picture. They continually couch this irresponsible duplicity in fancy monetary jargon – but the end result will be a mess of inflation and monetary confusion. Now the dollar is near the lows of the last several years. Take a look… 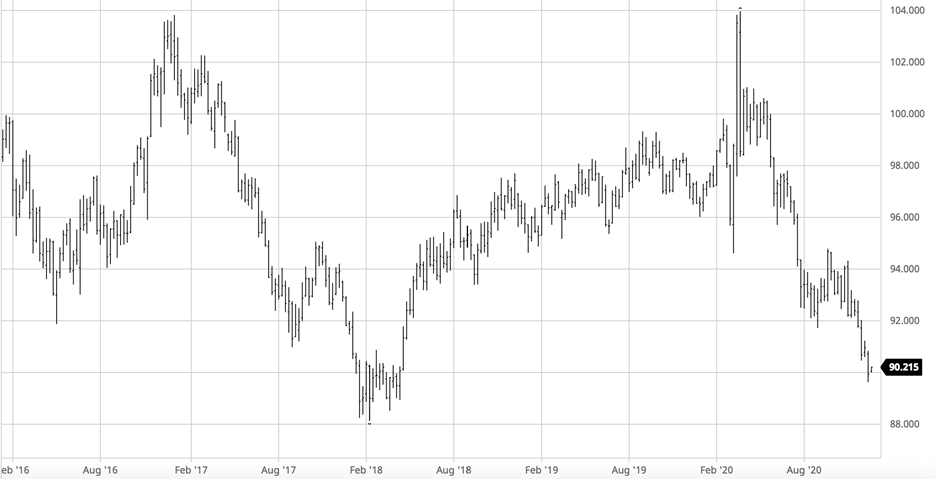 The dollar index that is being measured here is a calculation of the value of the U.S. Dollar vs. other currencies of the world.  The index is very over weighted against the Euro, however and the chart you are looking at is using a currency mix of nearly 60% Euro.  The Yen, British Pound Canadian Dollar and other currencies collectively make up the remainder. Obviously, the spike higher in February and March was a run to the “safety” of the U.S. Dollar. We have had quite a move in the opposite direction and this needs to stay on our radar.

Determining the future of currency valuations is notoriously difficult. It involves many different factors and on the fundamental side those factors include capital flows, trade and investment flows, interest rates, relative growth and inflation. Focusing in on just one of those factors, interest rates, it seems quite an anomaly that the Euro is rocketing vs. the U.S. dollar when ten-year interest rates are negative over much of the Euro. 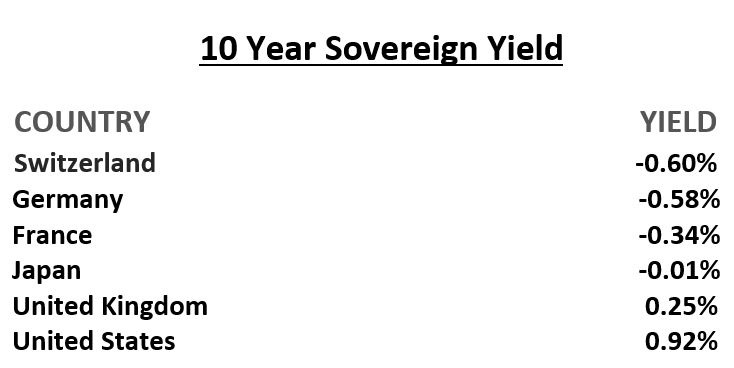 Even though interest rates are so much stronger in the U.S., many expect the dollar weakness to continue. Many believe that the world is over-invested in the U.S. and as the vaccinations improve business conditions worldwide the over emphasis on America will unwind. That theoretically, could bolster the current selloff in the dollar. In the meantime, in the European Union, their central bank continues to “Mediterraneanize” the currency. This means that austerity is out the window and the ECB continues to pump more Euros into the system (an additional 500 billion just last week.) We have historically postulated that the Euro is a flawed currency by design and that it will be relegated to the dustbin of history before the U.S. Dollar is. Of course, that is conjecture, but we do think that the selloff in the dollar is overdone. We will be surprised if it makes a significant move lower from here – but we will keep it on the radar – if we are wrong, we worry that that could mean serious things for the U.S. economy.

That brings us to the alternatives to the dollar. Just like we suggested with the Euro, the rest of the world’s paper currencies are enduring a veritable blizzard of central bank money printing. In addition to printing money, central banks are meddling in markets from top to bottom. They are setting interest rates across the whole yield curve, choosing winners and losers in credit markets and now they are spewing talking points that they are going to save the environment and initiate social justice for the less fortunate in our world economies. Of course, the merits of such ambitions are irrelevant, for even if they were pure as the driven snow, they are not under the jurisdiction of the central bank and country treasury departments. The whole thing smells a bit of desperation on the part of monetary authorities and does not instill confidence in the long-term future of our world monetary systems. The worlds sovereign debt numbers are far worse than we have ever seen, and it has become quite obvious that the “marketplace” of bond investors and providers will never again set the rates of interest. This has fostered a ROCKETLAUNCH in the price of cryptocurrencies that you may or may not heard of. Bitcoin is the kingpin of the cryptos and many are postulating that the price of it could go to several hundred thousand dollars per bitcoin. While we do not expressly advocate cryptos, those with the wherewithal may want to dip a toe in the water. It seems to us that at very least the value of bitcoins may continue higher for a while simply because some of the most powerful money people on the planet have said it will be so. Past that we are rather cynical of the cryptos, but the marketplace knows more than we do, and it is saying that cryptos are here to stay.

Of course, there is the age-old alternative to paper currencies that is gold. Gold has had an interesting year in that it is more than 20% higher on the year, yet still almost 10% off it’s all-time high that it reached this summer. Our opinion of gold stays steady. Gold is not an investment; it is money and can be held as insurance against profligate governments. Everyone should own some. If you can get a yield on that gold, then it becomes an investment, and you can always buy gold mining companies for short term to medium term investments which we do encourage. Many other commodities have been left underproduced and underinvested in. If the world economy does reinvigorate in 2021 we will have some amazing rallies in commodities from agriculture to energy and everything in between. These rallies will be especially pronounced if the U.S. dollar continues lower.