The rollercoaster ride of the stock market has hit some unprecedented levels recently. From the high print of late February, U.S. stock indexes sold off 30 something percent – in one month. The situation overseas has been worse with Euro Stoxx nearly 40% off its high and some emerging market indexes even worse. The corona virus has turned the world economy completely upside down. Of course, the only question now is – how long will this last?

Economic numbers are awful – and by some statistical measures of course we are already in a recession. When you look at some of the numbers, even the word depression is an understatement. "It may be the largest contraction of GDP on record in a specific quarter," said Gregory Daco, chief U.S. economist at Oxford Economics USA. He expects a 12% contraction, and some are even suggesting 15%. In our estimation this is complete conjecture right now. Expect earnings reports around the corner to be horrible. Whether a company’s numbers were already drastically affected by the virus or not will not matter. They will all report that the virus is to blame. In addition to that many companies will simply remove all guidance going forward – because no one knows how this is going to roll out. In our opinion, this will add to the exiting volatility as the market hates nothing more than complete unknowns. 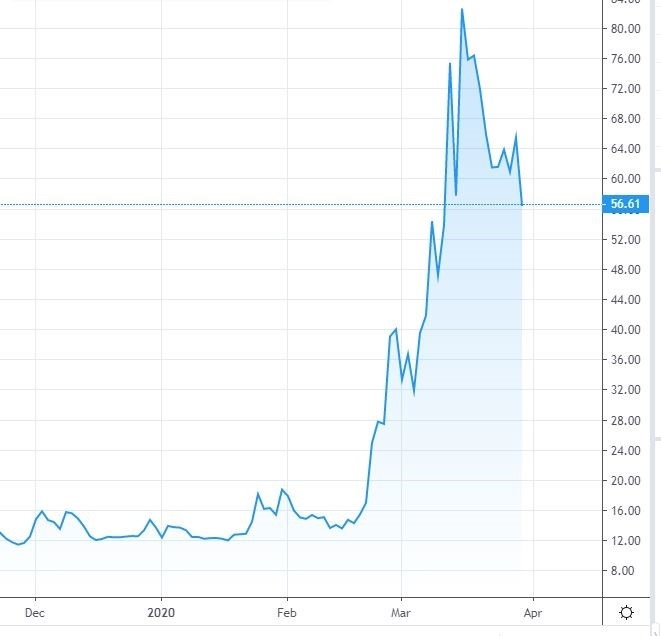 The VIX is a measure of volatility in the stock market – some even refer to it a chart of fear. It is calculated by a ratio of put options vs. call options which basically means that when this chart goes higher, market participants are afraid and are buying insurance to protect against the value of their stock accounts going down.  There is a significant rebound in the stock market over the last week as the panic selling has abated and government stimulus is pouring in. Of course, the economy is largely on lockdown still without any end in sight. Government leaders as of today are extending versions of this shutdown out to the end of April and in some situations into June.

We are still waiting for the numbers and news to start getting less bad. Right now, we are still on the front side of the parabolic curve in virus cases that is rocketing higher. Some of the numbers from overseas appear to be evening out or even declining – Italy for example may be over the hump, but that is offset by some resurgence indicators in China and South Korea.  In addition to renewed concerns in Asia, numbers out of Russia of corona virus cases are only just now being reported and lockdowns are just beginning.  Russia seems to be woefully unprepared for this epidemic, and although that might not have a large direct effect on our economy, it is an indication that the corona virus scare is not even close to being done.

The entire financial world is expecting a retest of the recent lows in the stock market. In the meantime, the bounce off of those lows is large – again precipitated by unprecedented bailout packages from the world’s central banks. Things will start to calm down in the weeks and months to come, but in the meantime stay safe and don’t get caught on the wrong side of this volatility.