There has been much discussion and debate in recent weeks whether the current blast of inflation is permanent – or as the Fed has intimated, transitory because of Covid-19 supply chain disruptions. Surprisingly, there has been a sharp drop in treasury yields recently even as we have had consistently these higher CPI prints. The annualized number for the Consumer Price Index is running at 8.3% which is the highest number since 1980.

Deutsch Bank’s Jim Reid, when looking at stubbornly negative real rates on Friday pointed out that the current gap between 10yr U.S. yields (1.5%) and U.S. CPI (5.0%) is a whopping 3.5%, the highest since 1980 (In fact, the gap has only been more negative for 10 months in the last 70 years, all of which were in 1974, 1975 or 1980). When you throw in the combo of inflation & labor shortages at U.S. small businesses is the highest since 1974 things get dicey. There are some obviously conflicting messages in financial markets, but the outlying indicator to us is lower treasury yields. 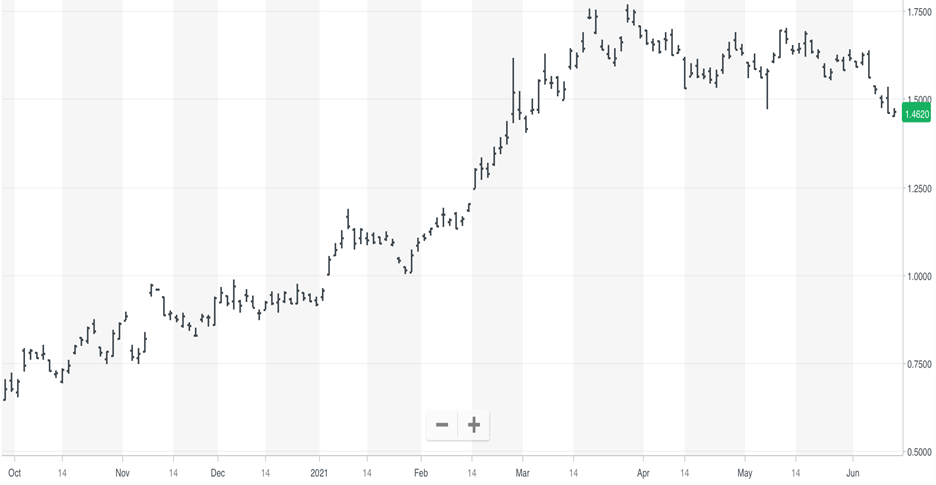 As absurd as it may seem, the bond market continues to suggest deflation is the more significant threat as we are currently at the largest deviation between annual CPI and interest rates since 1980. Ten year treasury rates leaking back below 1.5% certainly agrees with the Fed’s view that inflation is transitory and the treasuries are pricing in sub-2% inflation and economic growth.

Also consider the calculation logistics of some of these inflation rates and spreads.  Over the next two quarters, the year-over-year rate of change will slow the “base effect” as the economic ”shutdown” is removed from the calculation. Essentially, the starting point that was set so low during Covid lockdowns for growth rates -and inflation rates- will come out of the equation. So inflation won’t look so bad but growth won’t look so good. Another consideration is the fact that real wages are not keeping up with the actual cost of living increases. Much of this may be mitigated by the transitory nature of some of the inflation – but not with the housing situation. Housing costs are up -not going down anytime soon - and discretionary spending is taking a hit.  Especially as the stimulus is fading as Congress is scaling back some of the free money it is launching out, one would expect things to slow. It seems that the pulling forward of future consumption to now may have run its course and we have likely seen a near term peak in the economy and earnings growth.

Of course a huge part of the whole analysis of our economic future – and one we articulated our disagreement last week in this post – is the “liquidity” being offered by the Federal Reserve. Again, they are buying some $120 billion in assets every month and keeping short term interest rates essentially pinned to zero. They have said they would not start scaling back this huge stimulus until there had been "substantial further progress" in healing the U.S. job market. Of course, the description is ambiguous enough that they can justify whatever they want to do – but for now, markets are bracing for the chance the Fed will start to communicate its taper strategy at its Jackson Hole symposium in August, with possible action later in the year. We see current Fed policies as COMPLETELY RECKLESS and can’t imagine that even they will keep the pedal to the metal for the rest of the year. The Norwegian central bank has already announced plans to raise rates in the third or fourth quarter of 2021. New Zealand and South Korea have similarly dropped loud hints that policy tightening is on the agenda as conditions improve.

Central banks around the world are still in emergency policy mode and the stock market is pinned to all-time highs. The recent highs by a lot of measures aren’t showing a lot of zeal – and by some of the indicators we have mentioned, a pullback may be imminent. But that doesn’t mean that doom is right around the corner. The lower treasury yields imply that inflation fears are overdone and the stock market may have some time in “goldilocks” zone until unless the Fed pulls the plug. Stay tuned…