In recent posts we wrote repeatedly about all of the conflicting forces acting on our asset markets as we try to transition out of the Covid disaster. A year ago, the Fed was aggressively dovish and pouring trillions of dollars onto markets that had almost ground to a halt because of Covid lockdowns effectively being sand in the gears of whole economies.

Just one year later and now we have a Fed standing on the brakes and raising interest rates faster than we have seen since the 1970s. We had wildly bearish sentiment in the financial sector in 2020 that morphed into almost a euphoria in late 2021. We have a war in Europe. We have a governor in Texas calling up military tank divisions in an attempt to shore up our southern border. We have a Chinese economy trying to pull out of a tailspin as their lockdowns appear to have finally ended.

The Fed bailed out Credit Suisse which is now going through some restructuring. The Bank of England had to bail out some of the country’s pension system as gilt pricing cratered. We have a U.S. stock market that just rocketed out of the hole over the last month or so – only to now have the most bearish expectations on record by investors as defined by the put/call ratio (investors buying insurance because they think the market is going to go down.)

Yield curves all around the globe are inverted (short term rates are higher than long term rates) and Eurodollar spreads are out of whack reminiscent of 2007 – right before the wheels came off. Some economic indicators are coming WAY down and yet we have a Federal Reserve preparing to stomp on the breaks again next month with another interest rate raise. There is an absolute meltdown in cryptocurrency world and people are literally losing billions of dollars.

We have a Japanese monetary system (and Europe for that matter) that is staring out over the edge of a dark and deep abyss – AND we have a candidate to chair the Bank of Japan who claims that he will remove BOJ emergency support measures for Japanese stock and bond markets. That is an almost comical statement as Japan is an ongoing emergency. The BOJ owns some $5.5 trillion or 60% of the government’s debt. They are the largest single stockholder in Japanese markets as well owning nearly 10% of the Japanese stock market. If the BOJ walked away there would be no bid for Japanese government bonds. No one would try to buy them at anywhere close to current prices…no one. Good luck trying to let those markets discover prices on their own from here…

You probably get the point…this is a wild ride and no one knows what to do. All this craziness is going on and yet our domestic stock and bond markets are holding together quite well. Like we said last week, we thought the negativity was overdone and weren’t nervous of a stock market about to go off of a cliff. But now that we have had a good rally and the Fed is still talking about raising rates, one has to question the valuation of the stock market right now. Overpriced? Well, most of the rally in the 2010s after the 2008 meltdown was defined by an overpriced market that got more overpriced – so staying on the sidelines because of a valuation measure can leave you out in the cold. But at least this time you can earn interest on your savings while you wait if that’s what you choose to do.

Historically speaking, if you intend to withdraw some of your savings to use as time goes on, having that money in 5% guaranteed investments blows the doors off the performance of a portfolio you are withdrawing from that is in the stock market. There is a reason that even Warren Buffett has $130 billion sitting in cash right now (I bet he is buying treasuries with it until he finds valuations in stocks that he likes.) 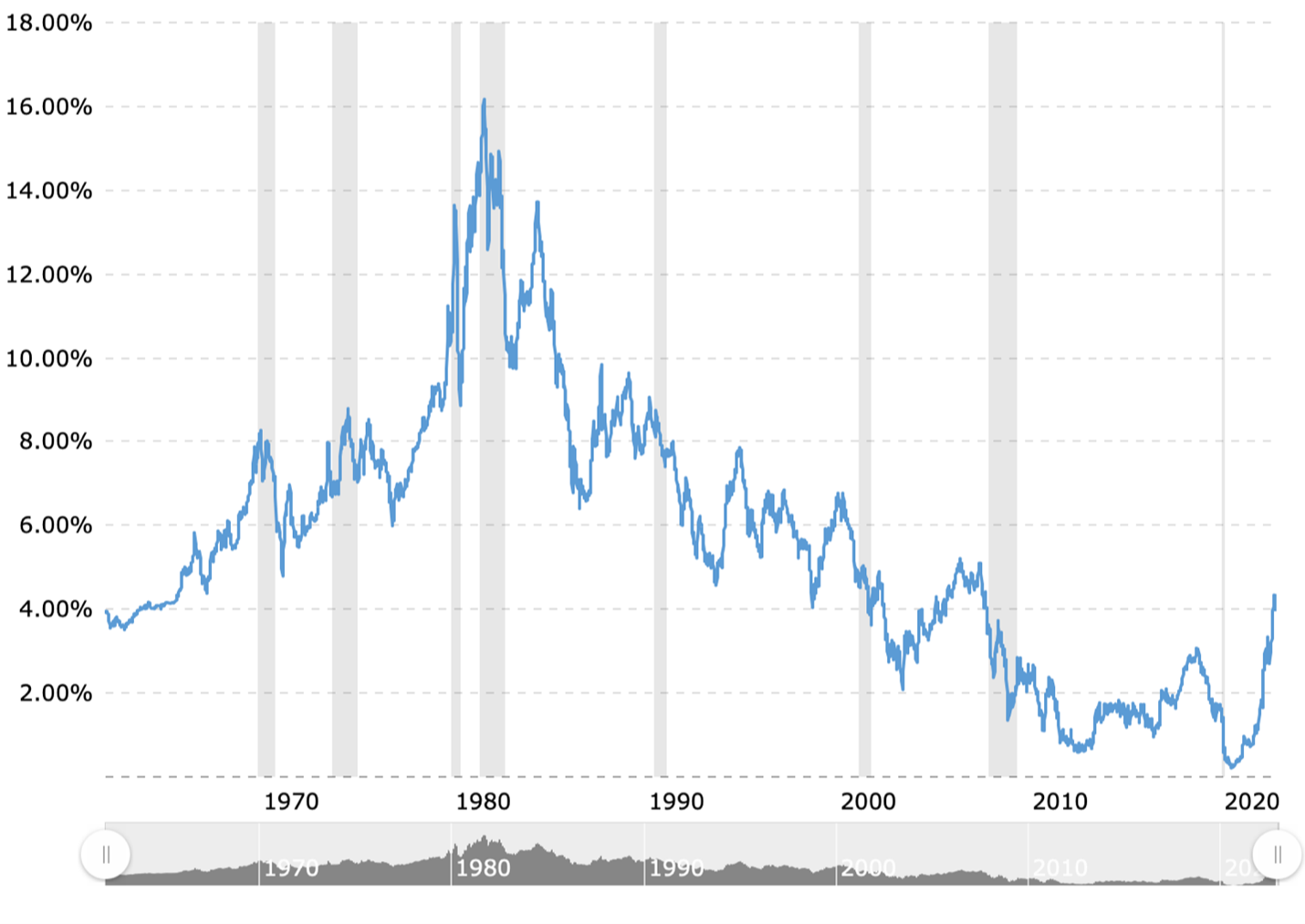 That is a sharp spike higher in interest rates, by the way…

The last time inflation was this high was in the late seventies – and you can see from the chart, interest rates were much higher back then. Maybe rates go up to challenge those late seventies rates, but we doubt it. There is too much bad debt in the system this time around and interest rates going that high would initiate financial meltdown in our guess. But only time will tell.

We certainly are not suggesting you run sell all of your stocks and buy 5-year treasuries, but we are getting more concerned about valuations of stocks in comparison to these higher interest rate guarantees. Of course, everyone fears that the Fed will raise rates until something breaks, but as we have said many times in the past – when everyone is sitting around fearing something it usually doesn’t happen.