Will The Fed Raise Rates?

All eyes in the financial world will be on the Federal Reserve come Wednesday when the policy statement will be released. Expectations are for a .50% rise in short term rates and the announcement of the dates of the Fed’s contraction of its balance sheet. As we mentioned last week, the outlook of a scorching economy that the Fed needs to reign in precipitously with aggressive interest rate hikes is waning. Some economic numbers are even deteriorating to the point of bordering on recession. An example of that would be employment numbers tumbling to its weakest since Aug 2021. Strangely though, some manufacturing numbers were a pleasant surprise upward. The data from 1st quarter earnings from big companies was disappointing, but the 2nd quarter appears to be starting on firmer footing. At the end of the day, there is nothing obvious to say that the Fed should not raise rates, and of course the Fed has been banging hawkish drums for weeks now as they are responsible for much of the inflation that we now see. No matter what we feel of the wisdom of raising rates, we are betting that the Fed will raise rates and the only possibility we see is they may only raise .25% - but that is unlikely.

Once again, take a look at a chart of the price of the U.S. Dollar vs. a basket of other currencies… 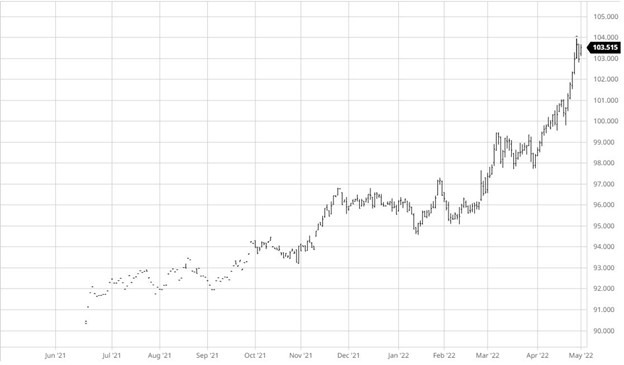 That chart doesn’t make us think that inflation is going to run wild even after supply chain disruptions calm down. Like we mentioned last week: sesweb.net/blog/canary-in-the-coal-mine

Asset markets have priced in this rate rise – so now the question is, where do they go if the Fed does as expected and raises interest rates .50% on Wednesday? Here we are going to share an analysis from Goldman Sachs.  Scott Rubner provides research for the top clients of Goldman and here is his 11-point checklist of why he thinks the worst of asset markets’ selloff is done for now…

There is a lot of trader-talk in that analysis but to put it simply, most everyone thinks the stock and bond markets are going down. Sentiment is at 5-year lows and volatility is high. GENERALLY that means – along with some of the other points Rubner puts together - that a relief rally at least is due.  There are many, many challenges to the world’s asset markets as are all over the news wires. We aren’t suggesting that things can’t get worse. But we are suggesting that for now the bulk of the damage has been done. Invest accordingly!!